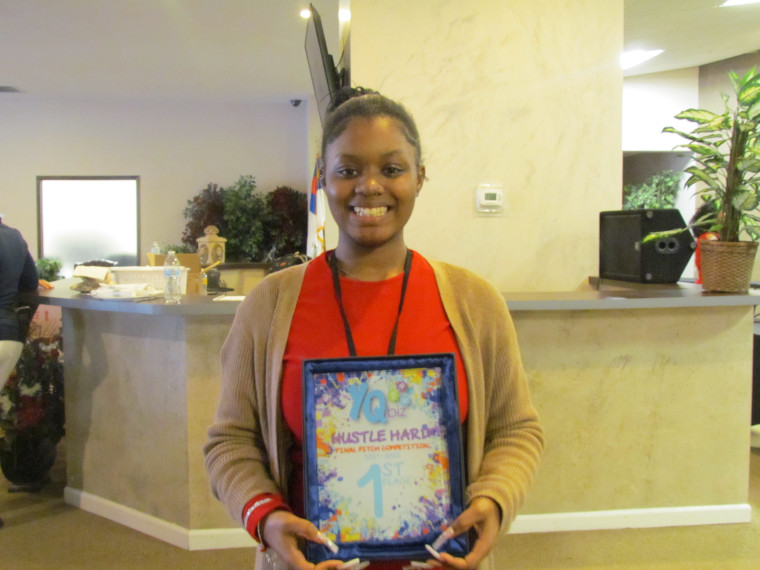 Eight young entrepreneurs recently competed in a “Shark Tank”-style at the Michigan Event Center, on Dort Highway, in Flint, with many of them winning money to buy materials they need to make their products, to start a website and more.

Each student had gained experience marketing their products and selling them at the Flint Farmer’s Market prior to the competition.

La’Niya Lynn was voted “Fan Favorite” by the audience at the event for her business Luxurious Customs. Lynn sells charms for Crocs™ shoes. She is 15 years old and bursting with creativity.

“I have social anxiety,” Lynn explained. “So, it was kind of different and hard for me to talk to the investors, but I’m glad I did it.”

Lynn said being voted Fan Favorite gave her more encouragement. She plans to incorporate a tracking device into her product, as well as expand the business to different cities.

Lynn’s plan is for the tracking device to be able to be placed anywhere on a person’s clothing.

“How it will work is there will be an app that you go into so the people you program into it will be able to locate you,” she added.

Lynn was inspired to add the tracking device because of the recent tragedy at Robb Elementary School in Uvalde, Texas, which cut short the lives of over 20 people, with most of them being young children.

“It felt pretty good to get my product out there and for everyone to hear me speak about it,” she expressed.

Wilson-Branson told the Courier she really isn’t as outgoing as she thinks she should be, but she’s starting to break out her shell as a result of becoming an entrepreneur.

“I’m starting to be open to new ideas and meeting more people,” she said.

Wilson-Branson stated she doubts herself a lot and was not expecting to win first place.

The next steps for Wilson-Branson’s business include plans to launch a website and to make jewelry specifically for males.

Wilson-Branson wants to use the money she earns and connections she developed through Charmed to eventually open an airline.

Jimantra Grant, manager of the YouthQuest program, is credited with being the brain child behind the YQ Biz ‘Hustle Hard’ Final Pitch Competition. She organized the students and talked to them about being entrepreneurs.

YouthQuest has also been working very closely with Genesee Intermediate School District and their entrepreneurial program. YouthQuest is administered by Flint & Genesee Education & Talent, a division of Flint & Genesee Group. It is made possible through the generous support of the Charles Stewart Mott Foundation and 21st Century Community Learning Centers.

Kimberly Leverette is the executive director of Flint and Genesee Group-the division of education and talent. Leverette said the competition was really all about making sure students have unique learning experiences.

“It’s about having a good time and coming together and making friends with student they might not otherwise be able to work with that are at other schools in other districts,” she added.

‘Those Dazzling Divas of Motown’ coming to the ‘New’ McCree Theatre

Governor Whitmer Calls on President Trump to Support and Invest in the Great Lakes Region, Soo Locks, and Selfridge Air National Guard Base