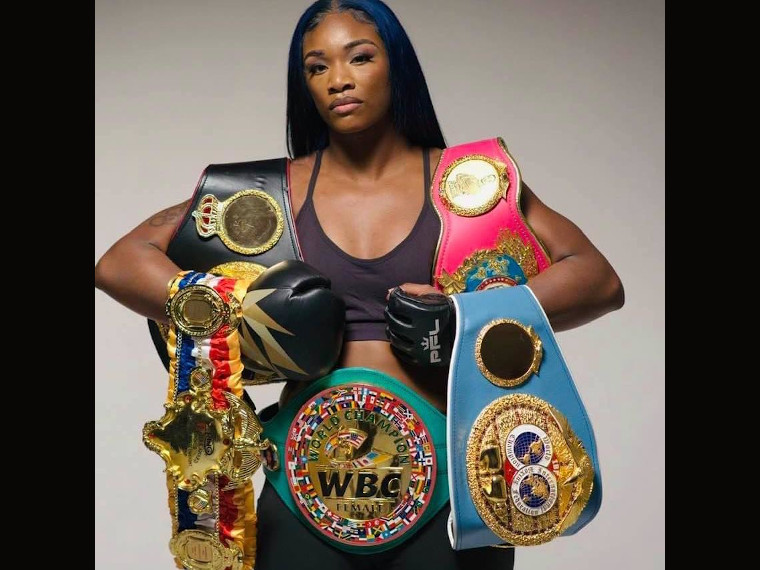 I had the opportunity to meet Claressa Shields for the first time in 2016 at the Dort Federal Credit Union Event Center and also to interview Jason Crutchfield, her former coach. Since then she has made history again by becoming the first boxer—male or female- to hold all four major world titles in boxing-WBA, WBC, WBO and IBF-at the same time, in two different weight classes.

“I’m really really pleased with her transition in becoming a four time world champion, (as) someone that started with very humble beginnings at Berston Fieldhouse,” said Bryant Nolden, executive director of Berston Fieldhouse.

“I think it’s a remarkable accomplishment, and I’m just very proud of the woman that she’s become” Nolden added.

Shields is the epitome of an example of what an individual with a difficult childhood can do when they remain focused on their goals and dreams.

Shields grew up on the north side of Flint. Her father, Bo Shields, was in prison from the time she was two until she was nine for a breaking-and-entering charge. Her mother struggled with alcoholism and drug addiction. Claressa Shields said when her mother was drunk, sometimes she would hit her. According to Claressa Shields, she never hit her mother back. Shields has said she believed her mother used to sell food stamps given to her for the children in order to get drug money. As a result, Shields was often hungry as a child. Because she did not have a bed, she slept on the floor. Shields also said she was sexually molested by multiple males who came to visit her mom, as well as by her youngest brother’s father. Because she wore a frizzy afro and had a small frame, Shields was made fun of by other children. Shields didn’t think her life would ever improve.

Then, her dad, who made money street fighting, told her about how Muhammad Ali’s daughter, Laila Ali, followed in her father’s footsteps and became a boxer. Shields assumed her father told her this because she wanted her to box, but her father told her boxing wasn’t for females. Eventually, and likely because of Claressa Shields’ persistence, her father took her to Berston Fieldhouse, where she was, at the time, the only female boxer training at the gym.

It was only after seeing the skills and raw talent of Claressa Shields that Jason Crutchfield started coaching her at Berston. She won fight after fight, starting with her very first one.

After Shields made it to the Olympic trials at age 16, Crutchfield let her live with him. Although he told Shields to respect her parents, he took on the role of somewhat of a relative.

Crutchfield was unable to accompany Shields to Qinhuangdao, China for the 2012 AIBA Women’s World Boxing Championships because of financial reasons. It was the first time Shields fought without Cruthfield, and ended up being her first loss, about which Crutchfield said he felt at fault for not being able to go.

Shortly afterwards, however, Shields advanced to the 2012 Olympics, held in London, England. Despite having to adjust to new coaches, she beat Russian boxer Nadezda Torlopova, and, as a result earned the gold medal and $25,000.

For four years after that, Shields won every fight she fought.

At the 2016 AMBC Olympic Qualifying tournament in Argentina, Shields won the gold medal and at the 2016 Summer Olympics in Rio, she won the gold medal in the women’s middleweight division by defeating Nouchka Fontijn of the Netherlands. Shields rose up in history to become the first male or female American boxer to win consecutive Olympic titles.

Shields was also recently the first woman in 20 years to be the featured fight on a Pay-Per-View match.

She is now widely considered one of the greatest female boxers of all time.

Taking on a new initiative, Shields has signed a three-year contract with Professional Fighters League and is expected to make her mixed martial arts (MMA) debut in 2021.

In addition to being a first-rate athlete, Shields is open about the importance of her Christian faith. She is an ambassador for Up2Us Sports. The national non-profit organization’s mission is “to engage, train and support sports coaches to transform youth, programs and communities,” according to the organization’s website.

It is fitting the Flint Courier News put the spotlight on a Flint native who is much more than a sports sensation during Women’s History Month.

“Women’s history to me puts the spotlight on the women who have impacted the lives of all of us because I have to think of my mother and think about the women that have been involved in my life to help me become the man that I am,” Nolden said. “So, behind every great man there’s always a great woman, and I’m just really appreciative of the spotlight that has been on the women here in the community, and I see nothing but an upside for Women’s History Month.”

Nolden hopes the women of Flint continue to be vigilant in whatever their pursuits are.

“We know that through God anything is possible.”

McCree Theatre ready to serve the community in its new home