Videography and photography by Anthony Davis

The opening of the rooftop of the Simmer Rooftop Lounge of the Hilton Garden Inn Flint Downtown offered a chance to witness a breathtaking view looking down at Flint from outside to just a limited number of guests, but all Flint and Genesee County residents are now invited to enjoy the sights and flavors of the rooftop lounge-with or without family or friends. The lounge is also expected to bring new jobs to the city.

“This place was really decrepit and it needed a lot of work,” said Tim Herman, CEO of the Flint & Genesee Group and president of Uptown Reinvestment Corporation.

“We were able to get it financed through Michigan Economic Development Corporation and the C.S. Mott Foundation to get this renovated,” Herman added. “We all sat down. We talked about having a rooftop as a team of Uptown Reinvestment members, and it just made a lot of sense to have a rooftop, along with the Sauce restaurant here at the hotel.” 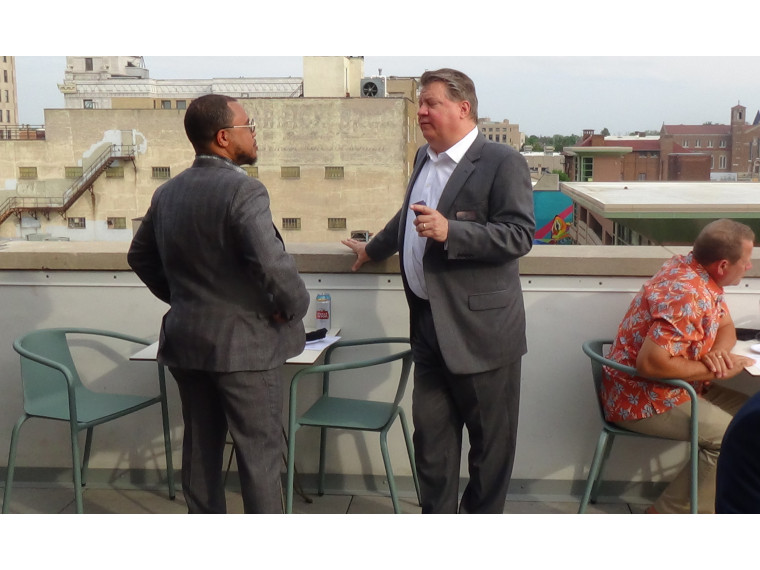 At lunchtime during the week, the lounge will be available as a venue for weddings, family reunions and baby showers. The awnings even make the sun and rain less of an issue.

“Overlooking the city-and with all the functions and events downtown, I think this will be a hit for all the residents of Genesee County,” Herman said.

The Hilton Garden Inn Flint Downtown now features 101 rooms. According to Herman, they are increasing occupancy because of the pandemic and this situation at the hotel is “getting a lot better.”

The Simmer Rooftop Lounge is now open Wednesday-Saturday 5 -11 p.m., with reservations from 5-6:30 p.m. and accepting walk-ins later into the night. There will be live entertainment from 6:30-9:30 p.m. on Wednesdays and Thursdays, including one and two man bands. The music will be all-encompassing, from Motown to modern, and will eventually include jazz.

Because the lounge is “a small place,” Dan Wright, general manager for Hilton Garden Inn Flint Downtown food and beverage, said the whole menu is unique, with an Italian theme. 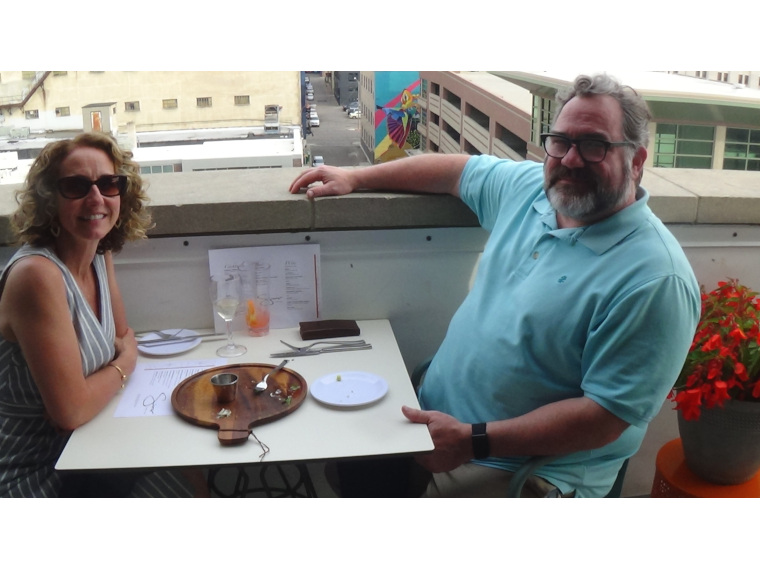 Prior to working in his current role, Wright said he ran premium dining at the Palace of Auburn Hills. He also ran Andiamo in Clarkston. He hopes to bring his experience and knowledge to Flint for the purpose of making the city a better place than it already is.

“We’re trying to do things like flatbreads that you won’t see down the street,” Wright said. “So, it’s going to be hard to compare our food to something that’s existing downtown.”

“The Mott Foundation is a big backer,” Wright said. “So, our prices are not outrageous. We’re not higher than any other venue in town.”

Wright said the cost of using the venue will also be reasonable for special events and occasions.

“We’re very cognizant of who are targets are. We know who are city is, and we want to have a lot of various venues attainable for anybody-not only the business travelers that the hotel has, but the people living in the city of Flint.”

Wright also hopes the lounge can be a magnet for people who come in from outside of Flint.

“I think people have a weird perception of what it is down here. So, the more people we can get here from Grand Blanc and Lansing even-it’s going to be good for Flint and all the businesses around. Opening another restaurant downtown gives people more of a reason to come here…It’s a nice, safe area right now, and we want people to understand it. We want people to come down and witness it and spread the word!” 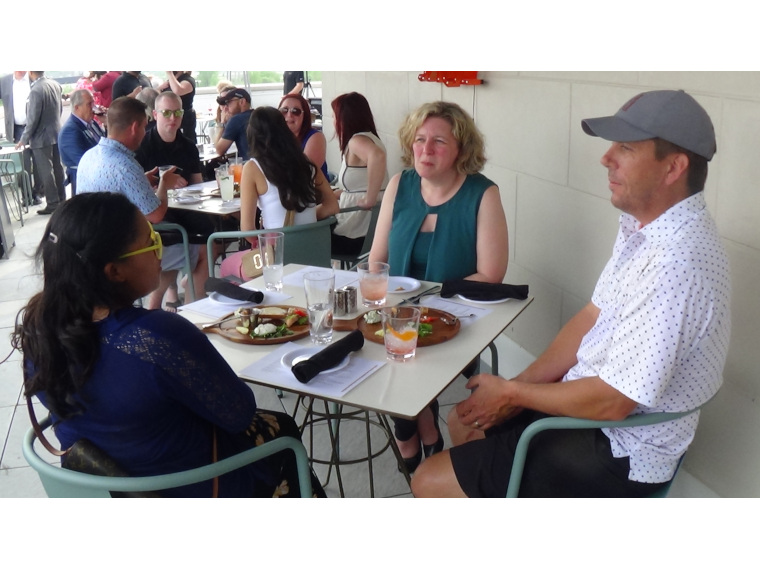 Wright also said there is an effort to make sure they are employing from the city of Flint as much as possible
“We want the community to work here, play here and not be worried that it’s too expensive or anything like that.”

Herman said the lounge is just a further renovation of downtown Flint.

“We’re working hard,” he said. “We just built a 100 market rate housing units just to the east of us here (east of the Hilton Garden Inn Flint Downtown). Towards Kettering in that neighborhood, we’re looking to expand and do infill housing there-and tear down some of the bad housing and fix it up. Going north, we’ve worked on the property behind the dollar store on Fifth Avenue and Saginaw Street, back down by Rally’s. We own that. We’re just trying to clean up the city, and put development in that gives jobs to this community. We’re trying to bring Flint back, and I think we’re having some success. The downtown has come a long way since 2000!…I’m very optimistic of the residents of this community because the residents of Flint and Genesee County are very resilient people!”

Flint Families Can Get Nutritious Food at Mobile Pantry in April