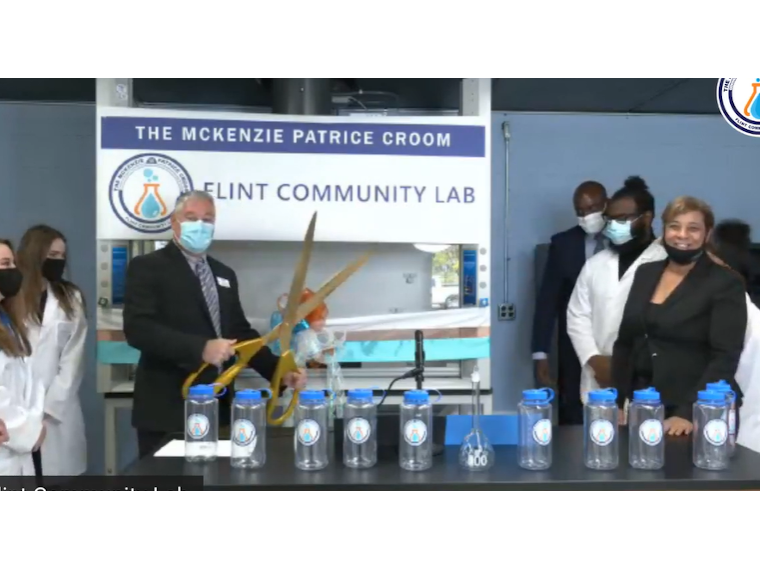 An innovative approach and collaborative community involvement has already received national recognition including the 2020 US Water Prize.

The Flint Community Lab is named in honor of McKenzie Patrice Croom, whose father Juwan Croom is a life-long Flint resident and the son of Sharon Reeves and Michael Harris, a founding partner of Flint Development Center. McKenzie Croom was born with seizures that were complicated by her exposure to Flint’s drinking water. She was only 2 years old but so strong, full of life and a true fighter at heart-she represents the need for the community to know and trust that their families have safe drinking water in their homes.

With the lab now fully functional, teams of students and volunteers will take and analyze water samples, survey homeowners, and provide filter, fixture and plumbing education.

This coordinated vision for this community lab provides Flint residents a long-term trusted source for water tests, a place where residents can go to have their water tested for lead and other heavy metals at no cost. Testing will be free for the first three years, and staff at the Flint Community Lab aim to test tap water from every occupied household in Flint by the end of 2022.

April 2014 marked the beginning of the Flint Water Crisis. The cameras may be gone from Flint, but the real truth is that for many still living there, the crisis isn’t over.  Trust in the drinking water and government waned after the Flint water crisis, which resulted in roughly 140,000 people being exposed to lead contaminated drinking water between April 2014 and October 2015.

Shelly Sparks, director of the Flint Development Center, hopes that the community lab will provide an opportunity for Flint to be a model as an innovative approach for the community to take the lead to gather data, analyze, and find solutions to our future water issues.

The success of this project to date is due to the commitment of Flint Development Center and Freshwater Future along with the involvement from a host of dedicated partners.

How COVID-19 has changed the way we do business forever

B. B. King, Defining Bluesman for Generations, Dies at 89

Flint Families Can Get Nutritious Food at Mobile Pantry in May