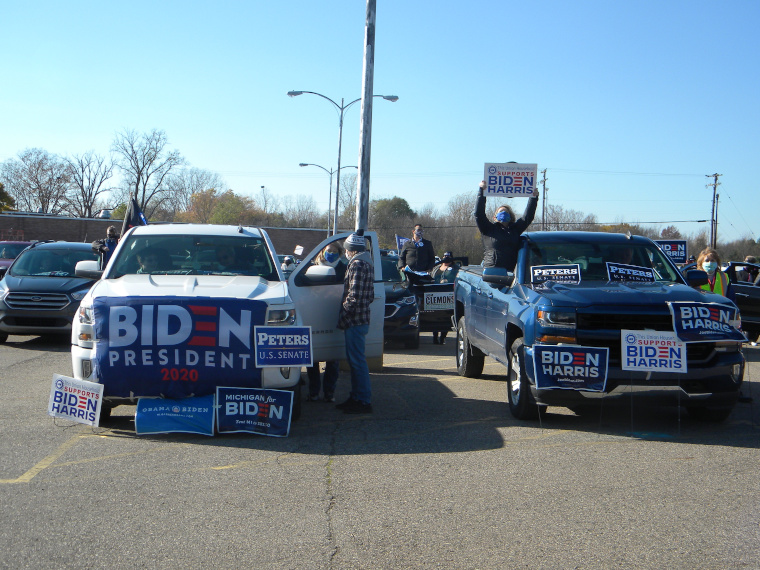 Though the Flint rally held Halloween Day attracted hundreds of cars full of not only enthusiastic Flint residents, but residents from across Michigan, to line up on Carpenter Road…the Joe Biden campaign exercised precaution during the COVID-19 pandemic. Other local and state leaders spoke ahead of Biden and former president Barack Obama and seemed to stir the emotion of attendees who sat inside of and stood outside parked vehicles in Northwestern High School’s parking lot holding campaign signs and banners.

Pastor Ralphael Read of Mt. Carmel Baptist Church prayed for God’s divine presence during the rally, for the city, state, the nation, world, leaders and those who have to make choices.

Mayor Sheldon Neeley said he was asking the crowd to vote for something better.

Neeley reminded those in attendance that besides Flint residents being able to vote at the polls on Election Day, Flint City hall was open and is open Sunday Nov. 1 and Monday Nov. 2 from 9 a.m.-5 p.m. He also said there are 10 drop boxes around the city.

Whitmer pointed out that Michelle Obama mentioned during her speech at the Democratic National Convention one state helped decide the last presidential election and it was understood that state was Michigan.

Horns honked loudly as Whitmer said the Trump virus response has been an embarrassment.

“The people who want to intimidate voters, they can’t intimidate us,” he said.

Congressman Dan Kildee (MI-05) asked the crowd to recall when the previous governor poisoned the whole city to save a few dollars as well as the Obama-Biden administration’s auto industry bailout.

“One of the last bills President Barack Obama signed during the Obama-Biden administration was legislation Senator Stabenow, Senator Peters and I wrote to help Flint through the crisis,” he said.

She said those who haven’t registered to vote can still do so at the clerk’s office before casting their ballots.

“All we have to do is vote, and we’re going to take back our country,” Stabenow said.

Senator Gary Peters (D_MI) said when we were facing the financial crisis which caused the Obama-Biden administration’s auto industry bailout to be necessary, it was “a mess Joe Biden and Barack Obama walked into; a mess created by the Republican administration that was there before.”

Peters said Biden and Obama stood with workers in Flint and Detroit.

Community leader Dondre Young urged those who haven’t voted to go to iwillvote.com.

“If you care about healthcare and the water you drink, you need to vote for Joe Biden,” he said.

Obama said Biden treats everyone he meets with dignity and respect as his mother taught him and Trump was interested in feeding his ego.

“You can expect that from a reality TV star, but from a president; you want them to put you above their own ego,” Obama said.

Obama said manufacturing in Michigan grew by 15% under his and Biden’s administration over the last four years and is up 1% under Trump’s first four years.

Biden said there was nothing Trump could do to stop the American people from voting in overwhelming numbers and “taking back this democracy.”

Biden said full, fair and free distribution of therapeutics and vaccines when they become available was part of his plan to get COVID-19 under control.

He pointed out Trump falsely suggested American doctors, nurses and other frontline workers who were putting their lives on the line were feigning the number of COVID-19 deaths to make more money. He said Trump is the one is only does things for money.

On the other hand, Biden said the wealthiest people and the biggest corporations were going to start to pay their fair share, and the super wealthy would pay the same rate they paid at the beginning of George Bush’s administration, if he is elected.

Horns honked again loudly as Biden proclaimed: “I (and) Barack understand something Donald Trump doesn’t; Wall Street didn’t build this country, you did!”

Biden also pointed out the Trump administration would be in court just days after the election.

“If they get their way, 100 million Americans will lose protections for pre-existing conditions, including more than 4 million Michiganders.”

Biden said in his own opinion there was nothing worse that Trump has done than the way he talks about U.S. service members and America’s war dead.

Biden’s own late son Beau Biden-and Iraq War veteran and a former attorney general of Delaware- has been described by Joe Biden as his hero.

According to theatlantic.com, Trump referred to the more than 1,800 marines who lost their lives at Belleau Wood as “suckers” for getting killed. The same article also says when Senator John McCain, who spent more than five years as a prisoner of the North Vietnamese, died, Trump told his senior staff, according to three sources with direct knowledge of this event, ‘We’re not going to support that loser’s funeral,’ and he became furious, according to witnesses, when he saw flags lowered to half-staff.

“Folks, everybody knows who Donald Trump is. Let’s keep showing them who we are. We choose hope over fear. We choose unity over division. We choose science over fiction. We choose truth over lies. Fellow Americans, it’s time for us to stand back, stand up and take back our democracy. We can do this! We’re so much better than we’ve been. We can be what we are at our best; the United States of America. God bless you all and may God protect our troops…”

Alumni association brings joy to the community during pandemic