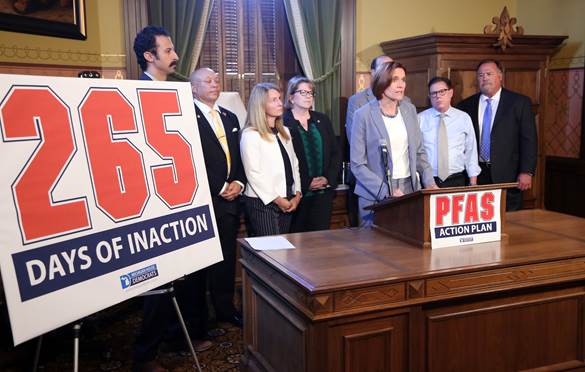 House Democrats called on the legislature to take immediate action to strengthen PFAS water quality standards by passing legislation introduced in December 2017 by state Rep. Winnie Brinks (D-Grand Rapids). Since PFAS was first discovered in private Michigan wells last year, 16 out of 83 counties have identified contaminated sites, with thousands of additional sites still being tested. At a recent press conference, Democrats also renewed their calls for hearings to provide answers to Michigan families as to why numerous reports on the dangers and locations of PFAS contamination were withheld from the public.

“Families across Michigan are living in a constant state of uncertainty about the safety of the water in their homes,” said House Democratic Leader Sam Singh (D-East Lansing). “That uncertainty is largely the result of continued inaction from Legislative Republicans who are more focused on giving wealthy polluters tax breaks than getting answers and accountability for Michigan families. Democrats are ready to pass legislation to clean up our water and get answers for Michigan families – we welcome Republicans to join us in this fight.”

Democratic legislation would strengthen Michigan drinking water regulations for perfluorooctane sulfonate and perfluorooctanoic acid, or PFOS and PFOA, which may increase the risk of cancer and thyroid disease. The legislation would lower the safe drinking water advisory threshold for PFOA and PFOS from 70 parts per trillion (ppt) combined to 5 ppt combined. Democrats also called for the legislature to provide communities with alternative water supplies in cases of contamination instead of relying on impractical bottled water for washing, bathing and cooking.

“Access to clean, safe drinking water is a fundamental human right,” said Rep. Brinks. “My legislation will protect that right, and the families of our state, by strengthening the standards for our state’s water quality. With the health of every Michigander at stake, it is past time for the legislature to take action.”

Since the introduction of Rep. Brinks’ legislation in December, House Democrats have repeatedly called on the chairman of the House Oversight Committee to hold hearings on PFAS contamination. Yet the Democrats’ pleas for action on PFAS have gone unanswered by legislative Republicans.

“Families should not have to worry about whether their water is safe to drink, yet that has been the disturbing reality facing Michiganders across the state,” said state Rep. Sheldon Neeley (D-Flint). “Discovering that contamination exists is only the beginning; that’s why we’re calling on our Republican colleagues to join us in taking action now. Our families deserve clean water. They deserve transparency from their government. And they deserve justice when their communities have been recklessly exposed to contaminated water.”

Additional information about PFAS can be found at https://www.michigan.gov.

$1 Million investment to contact 1 million Michiganders, help those who may have lost health insurance get covered announced by governor; options are available.