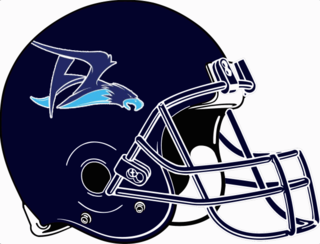 The conditions were windy as the Hamady Hawks played host to the Swartz Creek Dragons in a non-conference battle at Jennings Field. Both teams came into the game undefeated. The Hawks, 4-0, have relied on their offense to outscore opponents while the Dragons have played good defense, leaning on their senior leadership to also rank 4-0.

This game had a very special meaning for Swartz Creek, not only for the players but for the fans too. When Joe Spencer was named head football coach for the Dragons in 2016 after a dozen years as an assistant, he knew things had to change on the field. The players, faithful students and fans were also in agreement.  The Dragons made it to the playoffs only once in their history. Coach Spencer wanted to change the mindset of the players who had grown accustomed to losing year in and year out.

This year’s team is senior driven. There are about 15 seniors that are starters. The big eye opener this season came when the Dragons beat Flushing 16-13 in week three. Facing the Hawks who have played good football so far this season was their biggest challenge.

Veteran head coach Gary Lee and his Hawks are no strangers to playoff football. The Hawks look like one of the best teams in the state.

The Dragons regrouped and picked themselves up and drove down the field to score their touchdown. Running back, Thomas Marshall, who ran hard all night, took it to the house with a 29-yard scamper to make the score 14-7.

The Hawks’ starting QB McCoy got hurt in the second quarter and did not return. Coach Lee inserted Moore as his replacement. Moore connected with Trevonte Davis with a 26-yard touchdown pass to make the score 20-7.

Swartz Creek would not fold. Their offense hit pay-dirt when Max Murphy had a 31-yard touchdown run to close the gap to 20-13. Hamady, which boasts one of the state’s best offenses, continued to move the ball and scored again just before halftime. Moore hit Tyrick Robinson for a 29-yard score to make it a 26-13.

In the second half, both teams played even, but it was too little too late for the up and coming Dragons. They showed a lot of character by not giving up. Murphy scored two touchdowns for Swartz Creek. Noah Kalakay caught the Hawks off guard and returned a kickoff 70-yards for a touchdown late in the fourth quarter. Gibson had a stellar game for the Hawks. He finished with four touchdowns. Tyrrell Weston added a 2-yard touchdown for Hamady. The Hawks’ record improved to 5-0 while the Dragons suffered their first setback of the season and are now 4-1.

County press conference offers updates on closings due to COVID-19