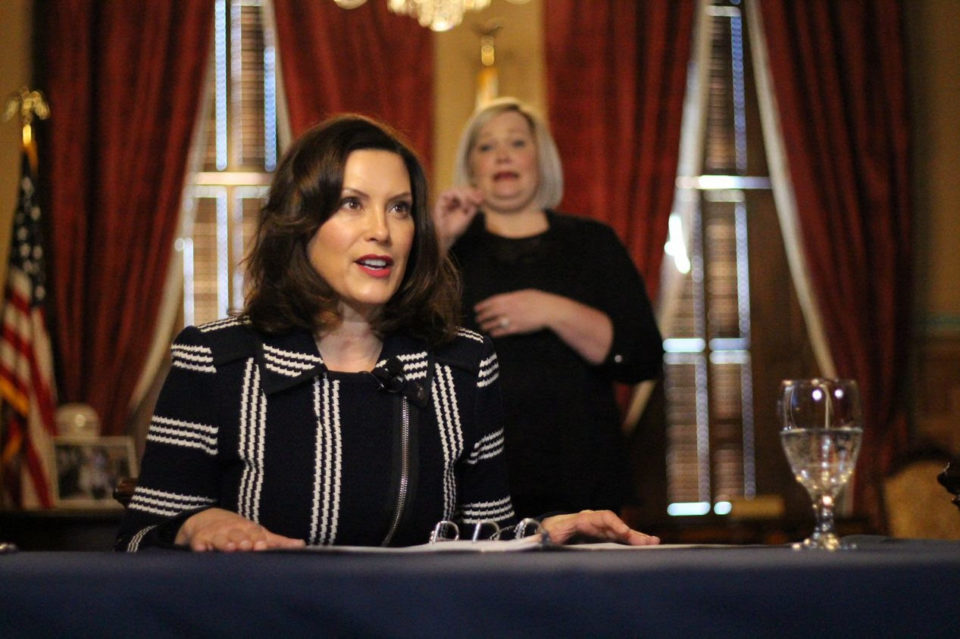 “The bipartisan Michigan Reconnect program will connect thousands of Michiganders to good-paying jobs and connect businesses with the talent they need to thrive in their communities,” said Whitmer. “I’m proud of the hard work that has gone into this bill package, and look forward to continue working with the legislature to reach our goal of 60 percent of Michiganders with a postsecondary degree by 2030.”

House Bill 5576 creates the Michigan Reconnect Grant Act tasking the Department of Labor and Economic Opportunity with establishing the Michigan Reconnect Grant Program which will provide grants and scholarships to adults seeking a postsecondary education. The act give LEO the responsibility to administer the program, as well as submit an annual report and report the number of institutions, individuals and recipients of the grant. The bill was sponsored by Representative Ben Frederick, R-Owosso.

House Bill 5580 amends the school aid act to revise the distribution of funds under the tuition incentive program. The bill also creates exceptions to the general requirement that an institution must ensure that all known available restricted grants for tuition and fees are used prior to billing the Tuition Incentive Program. The bill was sponsored by Representative Sarah Anthony, D-Lansing.

Senate Bill 268 establishes the last-payer scholarship program for eligible students to attain a Pell-eligible associate degree or industry-recognized certificate or credential. The bill was sponsored by Senator Ken Horn, R-Frankenmuth.

House Bill 5401, 5402 and 5463 work together to combat lakeshore erosion, flooding and degradation across the state by creating a process for establishing “no wake zones” in various Michigan lakes.

“Michigan is lucky to be surrounded by and filled with natural beauty and as we face these difficult times it is still important to lessen the impact of high waters and protect our natural resources,” said Whitmer.

House Bill 4908 amends the State Housing Authority Act to increase the cap on the aggregate principal of outstanding corporate bonds and notes of the Michigan State Housing Development Authority (MSHDA) from $3.4 billion to $5 billion. The bill was sponsored by Representative Karen Whitsett D-Detroit

House Bill 4125 amends the Income Tax Act to adjust the percentage of the income tax revenue earmarked for the School Aid Fund (SAF) from 0.954% to 1.012%. The bill was sponsored by Representative Scott VanSingel, R-Grant.

Senate Bill 415 changes the definition of “credit card arrangement,” limiting it to unsecured loans or extensions of credit made to individuals for personal, familial or household purposes. The bill was sponsored by Senator Aric Nesbitt, R-Lawton.

Senate Bill 543 amends the Liquor Control Code to expand the definition of “diligent inquiry” to determine an individual’s age. SB 543 would permit an individual’s “good-faith inquiry” to include using biometric technology, such as a fingerprint scan, so long as certain conditions in the bill are met. The bill was sponsored by Senator Curtis S. VanderWall, R-Ludington.

Senate Bill 125 amends the Uniform Unclaimed Property Act to specify that the provisions of 2010 PA 197 that modified the dormancy periods under the act would not apply if the property owner were on active duty military service, regardless of whether that service was within or outside of the United States. The bill was sponsored by Senator Tom Barrett, R-Charlotte.

Senate Bill 711 amends the Liquor Control Code to create a limited production manufacturer license that would allow the licensee to purchase beer from a brewer or micro brewer (including an out-of-state equivalent) and modify that beer. The bill was sponsored by Senator Jon Bumstead, R-Newaygo.

Senate Bill 712 was written to allow the council of smaller communities who are unable to meet quorum and conduct business to adjust the rules of resignations and vacancies.  SB 712 allows the resignation of a village officer to be made to the village president and effective upon receipt. SB 712 was sponsored by Senator Jon Bumstead, R- Newaygo.

Senate Bill 754 modifies the reorganization of the 79th district court allowing the 79th to maintain its seat. The bill was sponsored by Senator Curtis VanderWall, R-Ludington.

Senate Bill 812 would amend the requirements for unemployed individuals to show they are “actively engaged in seeking work” under the Michigan Employment Security Act. The bill was sponsored by Senator Ken Horn, R-Frankenmuth.

Emergency order setting penalty of fines up to $1,000 issued after Michigan records more than 10,000 COVID-19 cases