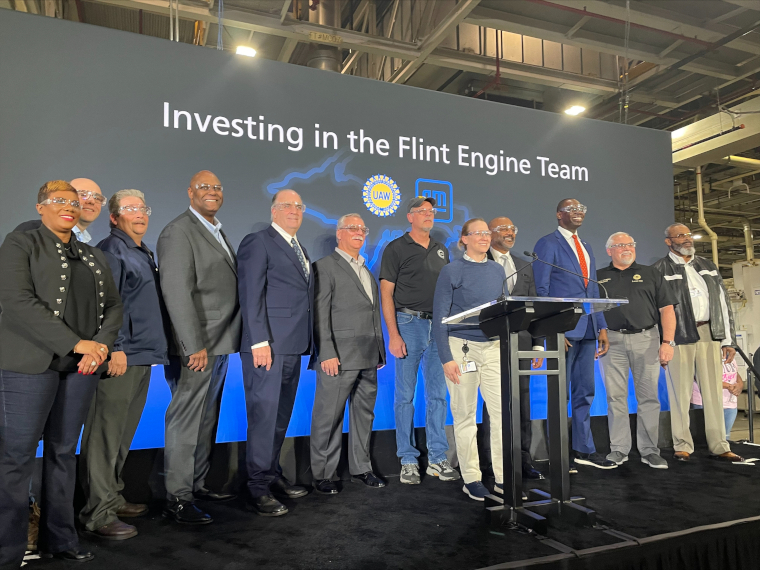 LANSING, Mich. – Governor Gretchen Whitmer and Lieutenant Governor Garlin Gilchrist II recently applauded General Motors’ announcement that it is investing nearly $800 million in its Flint and Bay City plants, both of which will strengthen the automaker’s full-size truck and SUV business portfolio in Michigan and retain jobs across the two locations. Michigan won the vast majority of the $918 million investment from GM in four facilities across the country.

“GM’s $800 million investment in Michigan will retain good-paying jobs and enable us to build on our legacy as the place that put the world on wheels,” said Whitmer on Jan. 20.

“Just one year ago, we announced GM’s historic, $7 billion investment growing its electric vehicle manufacturing capabilities in our state,” the governor added. “Today’s exciting announcement ensures GM’s truck and SUV components continue to be built in Michigan and builds a strong base for future decisions around electric vehicle and battery investments as well. I thank GM for its ongoing commitment to making its future right here in Michigan.”

“GM has invested more than $1.1 billion in Flint Engine since 2011, and more than $3.2 billion across all its Flint manufacturing plants during that same time,” Gilchrist said. “This investment makes a return of the V-8 engine to GM’s birthplace of Flint, Michigan. It is a testament to the skill and experience of the Flint Engine workforce, and truly, to the talented manufacturing workforce in the entire state.”

General Motors will invest $579 million to prepare Flint Engine to assemble the company’s sixth generation family of Small Block V-8 gas engines along with the related block, crank and head machining. Flint will continue building the 3.0L turbo-diesel during the facility renovations. GM’s 3.0 L diesel is used in a variety of light-duty truck applications.

At the Bay City plant, GM will invest $216 million to prepare the facility to build camshafts, connecting rods and block/head machining supporting future V-8 production at the Flint Engine plant.

“The continued maintenance of GM’s manufacturing presence in Michigan across both its popular truck and SUVs models and facilities will support GM’s all-electric future,” said Messer added. “We appreciate GM’s continued vote of confidence and are proud to join the Whitmer administration, bi-partisan legislative leaders along with our local and labor partners as we celebrate GM’s expansions in Michigan.”

The recent news comes on the heels of last week’s announcement by Business Facilities recognizing GM’s historic $7 billion investment in electric vehicle and advanced battery manufacturing as its 2022 Impact Awards. As the largest investment in the company’s history, the project includes a $4 billion investment to convert GM’s Orion Township assembly plant to produce full-size electric pickups and up to $2.5 billion to build Ultium’s third U.S. battery cell plant in Lansing, growing the state’s global leadership in electric vehicle and advanced battery production.

It also follows a host of additional investments made by the company since January 2020, including:

Several Flint-area ramps to be closed by end of today

100 Deadliest Days of Driving don’t have to be deadly