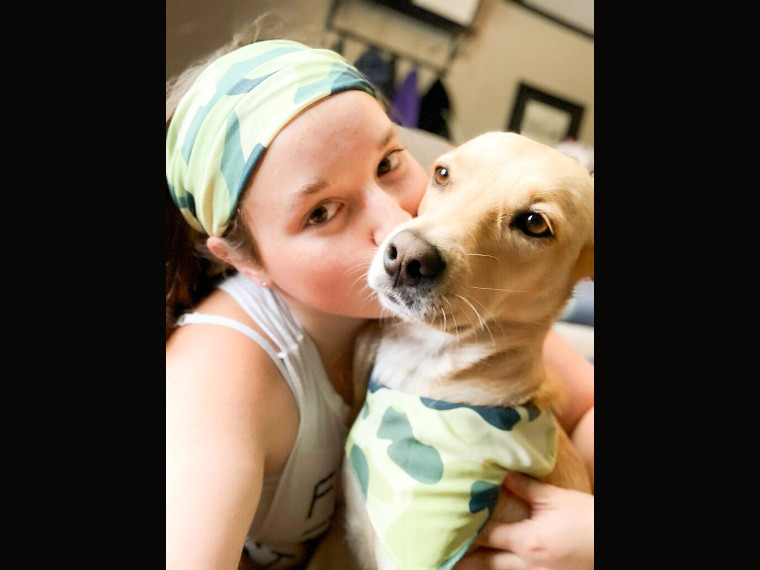 Featured photo: Cassidy Brinker, age 21, of Genesee County with her dog, Carolina. Brinker said Carolina “helps her get through.”

Cassidy Brinker, age 21, of Genesee County, was an athletic go-getter before the pandemic hit.

“I used to be a lifeguard,” Brinker said. “I used to run cross country and do all kinds of fun things. Now, I can’t even go to my bathroom without having what they’re calling an asthma attack. Right now they’re not even sure what’s going on with me. So, they labeled it as asthma. All they know is it’s COVID complications. That’s not a diagnosis. So, they’re treating it as asthma, which is quite frustrating because it’s not what it is.”

Brinker contracted COVID-19 at the end of March. Her birth mother, who she is currently living with, also contracted it.

“I actually know exactly where I got it,” Brinker said. “I got it from my workplace.”

Brinker was working at a local bakery.

“Back in March, nobody took it really seriously. They really didn’t know that we needed to mask up or anything like that.”

One of Brinker’s co-workers was feeling really ill. She thought it was the flu. She still went and got tested for COVID-19.

“Instead of quarantining and waiting for the test results because she didn’t know that she needed to do that at that time, she ended up working with me for three days…The next thing I know she was positive.”

The whole staff had to quarantine. Brinker was the only one who contracted it at the time. About a week after Brinker got sick, another co-worker contracted it.

The small bakery ended up closing down due to lack of staff.

“It was really scary.”

Losing income has been difficult for Brinker along with many other challenges.

Initially, Brinker, who had asthma as a child, was able to take care of herself at home with a nebulizer the doctor prescribed. The nearest hospital was packed.

“They basically said unless you’re blue, we don’t have space for you.”

Even though Brinker has since tested negative for COVID-19, Brinker sees a pulmonologist; a COVID-19 specialist in Lansing working on healing her lungs, a general doctor and a cardiologist because her heart has had to work extra hard. Her heart rate is a dangerous 150 even resting! In addition, she said having all the extra expenses has been “really rough.”

“I’ve barely left my house since this all started in March because I have antibodies, but they’re not sure if I can get it again. My immune system is still really weak because it’s trying to fight off what’s going on. It’s all kind of crazy!”

Occasionally, Brinker will get what’s being called a relapse.

“I’ll get a high temperature for about four days. Then, it just goes away.”

Brinker said this does not mean she has the virus again.

“I’m in some COVID support groups, and everyone seems to have very similar symptoms afterwards. They always seem to relapse about three or four months in-then another time like six or seven months….Living like this; my life completely changed. I went from being a very active person to someone who can barely get out of bed and has to be basically waited on. I’m not a kid. I’m 21. This is the time I’m supposed to be partying and going crazy. I can’t do that. It’s depressing.”

Brinker hopes to help others because of her experience. She is part of a COVID-19 study and hopes a vaccine can be created with the antibodies in her body. She has been told because of her younger age her lungs are likely to heal, unlike many older adults who will be experiencing these effects for the rest of their lives.

Brinker’s support groups on Facebook include the Long COVID Support Group, COVID Support Group and Families and Reparation, which is about getting help paying medical bills. There, she is able to connect with others from around the world. She encourages others in need of support to reach out.

Where am I From By Semaj Brown

Mayor to deliver his first State of the City

Boost Your Spirits Through the Holidays and Beyond