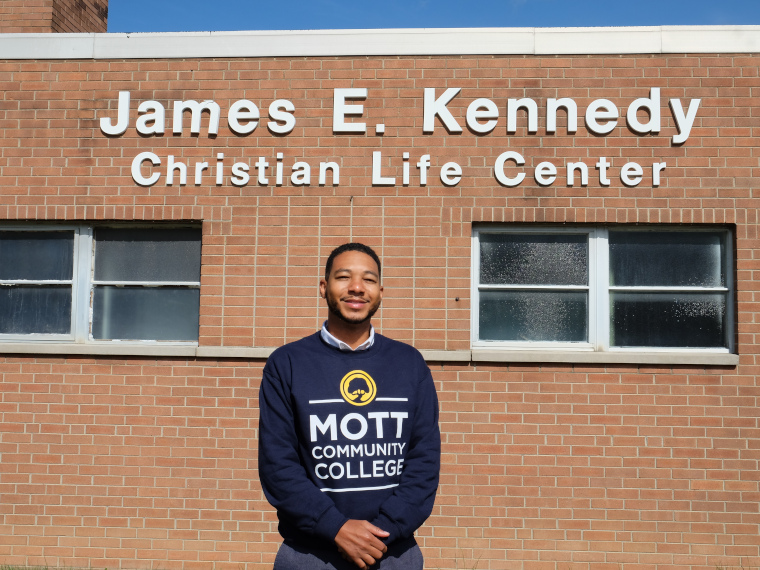 Rafael Christopher Turner, a candidate for Mott Community College (MCC) trustee who previously served on the board, is one of seven candidates running for two open seats. If elected, he will be the only African American on the board of trustees.

“I think it’s important to have diversity on the board that reflects the diversity of the community,” Turner said. “I think it’s important to be a voice for all the students…It’s imperative particularly for the Black community that our interest is represented and that we have someone there at the forefront to make sure that there’s equitable outcomes for all students.”

Turner believes one of his greatest accomplishment within his seven years of MCC board experience is being able to vote and bring the culinary arts program expansion to downtown Flint.

“Another (accomplishment) would be my involvement in bringing the Lenore Croudy Family Life Center to the campus,” Turner said. “While I was on the board, we purchased the former Woodside Church that was adjacent to the main campus of Mott Community College.”

The center is named after Croudy; the longest serving member and chairperson of the MCC Board of Trustees in the college’s history, who passed away in January 2017. According to a Dec. 2018 Flint Courier News article, the center functions as a resource center to house support services ranging from community human service and nonprofit information and referrals, the Mott Eats Food Pantry, assistance with tax return preparation, job and career supports, assistance with housing and homelessness issues through local providers and legal and health-related referrals. It also provides childcare for students who are also parents, and from there professional clothing can be obtained for students needing it.

It’s been since Dec. 2018 since Turner has been on the board of trustees. Since then, he has continued to stay involved in moving MCC forward by serving on the Foundation for Mott Community College (since 2019); the philanthropic arm of the college that raises money to support it financially, supports student emergency funds to assist students and participates in a host of activities to fundraise for the college.

Turner has a Master of Public Administration degree.

“Early on my mom instilled a passion and love for learning, always instilling the importance of having an education-and she always made that link for me that education is tied to opportunities.”

Turner credits his mom’s encouragement for him to pursue higher education to opportunities he has had from working on Capitol Hill for the Congress in the United States Senate to now working in philanthropy for the Ruth Mott Foundation.

Turner considers himself a role model.

“I have prided myself on the level of interaction that I’ve been able to have with Mott students; with individual students, (and) there’s also been several student groups on campus I have met with outside of board meetings to talk about the importance of completing school and obtaining their associate degrees. I also talk to them about potential career opportunities after college, letting them come to different offices that I’ve worked at.”

Turner is happy with the response since March to the COVID-19 pandemic of the administration from the president’s office, the college administration, the faculty and the staff at MCC. Classes are held virtually with the exception of a handful of classes that require hands-on learning, taking place with several modifications.

Turner’s platform for his potential role as MCC Board of Trustees member has been equity, access and affordability. He wants to make sure all students have what they need in order to show up ready to learn. He wants the college and learning activities to continue to be accessible and affordable for all students-from traditional recent high school graduates to nontraditional students coming back to learn, including senior citizens.

“Being a father of a child with special needs, having a son with autism, accessibility also means having supports that we need to be able to support students with disabilities or who have different challenges or abilities.”

Turner co-chaired for the 2020 Say Yes to MCC Millage campaign. The millage allowed for MCC’s infrastructure to be maintained, helped support technology on the campus and was used for renovations, remodeling, improvements and purchasing needed equipment.

In addition, he dressed up for and performed in several years of Mott, Motown and More; a premier celebrity lip sync fundraising event.

“I definitely feel I am the best candidate for the role…One of the most important reasons is the fact that I have seven years of previous experience on the board for Mott Community College. I have also previously been elected on a national level to represent Mott and the Michigan Community College Association at the Association of Community College Trustees, which is a national organization that does advocacy work and policy work for community colleges all across the county. I believe Mott also has a very diverse student body. Again, I feel it is important to have an African American trustee, a Black trustee on the board that represents that diversity that exists in our community and on our college campus.”

Turner, who is 41, hopes to bring his diverse skill sets to the board of trustees, support the first class faculty and staff at Mott and be a voice for the students.

Mail carrier charged with assault and lying to police in Flint

Election information from office of the Flint City Clerk