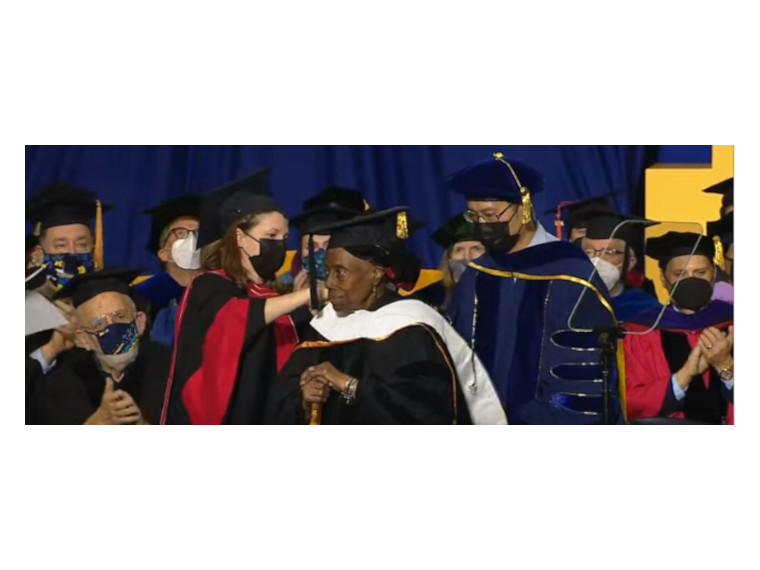 The University of Michigan awards honorary degrees to individuals who are remarkable for their achievements and has recently awarded an outstanding Flint resident.

That mission is to serve the people of Michigan and the world through preeminence in creating, communicating, preserving and applying knowledge, art and academic values and to develop leaders and citizens who will challenge the present and enrich the future.

These honorary degrees are presented at the commencement ceremony, before thousands of graduating students and their families.

“Through the presentation of honorary degrees at commencement, the university seeks to inspire students and others to recognize, to respect and to seek to emulate such persons and such accomplishments,” Lumeng said.

A committee comprising seven faculty (including from the UM Flint and Dearborn campuses), two students, two alumni, the president, the provost and several of the vice presidents, and chaired by the dean of the Rackham School of Graduate Studies, makes the selections.

More than 1,000 people have received honorary degrees from UM since 1852, including former presidents Barack Obama and Bill Clinton, Supreme Court justices, governors of Michigan and directors of the National Institutes of Health.

At the University of Michigan’s 2021 winter commencement held recently, E. Hill De Loney, a MICHR Community Advisory Board (CAB) member who is over 80 years old and known as Flint’s “mother of Juneteenth,” received an honorary Doctor of Humane Letters degree

”Mrs. De Loney is a nationally recognized pioneer and expert in community-based participatory research,” Lumeng stated. “Individuals who have been awarded honorary degrees from the University of Michigan over the past 150 years are individuals whose achievements are closely identified with the university’s central purposes:  teaching, research and scholarship (i.e., academic accomplishments) or achievements outside the academic world—who affirm the university’s commitment to societal goals and the improvement of ‘the quality of civilization.’ I believe Mrs. De Loney is unique in that while most individuals’ accomplishments fall in just one of these two groups (academic contributions or societal contributions outside of academia); Mrs. De Loney’s achievements exemplify bridging academia and society. Mrs. De Loney has been consistently dedicated throughout her career to ensuring that the needs of society are primary in research and that the community is centered, elevated and respected, in research endeavors.”

According to Lumeng, scientific research has a difficult history of too often considering communities to be “subjects” of research.

“Mrs. De Loney has been a national leader in reframing the relationship between researchers and communities to be a partnership. Mrs. De Loney has also been a leader in cultivating a deeper understanding of racism and its impact on public health among researchers and health care providers. Particularly in the current moment in history, these contributions are especially critical.”

Lumeng expressed that as the director of the University of Michigan’s institute (MICHR) dedicated to accelerating the translation of science to application that improves the health of individuals and communities, the best single word she could use to describe the feeling she had when she witnessed De Loney accepting the honor was “proud”.

Battle in opposing proposed Ajax plant not over

Add grapes to your holiday gatherings