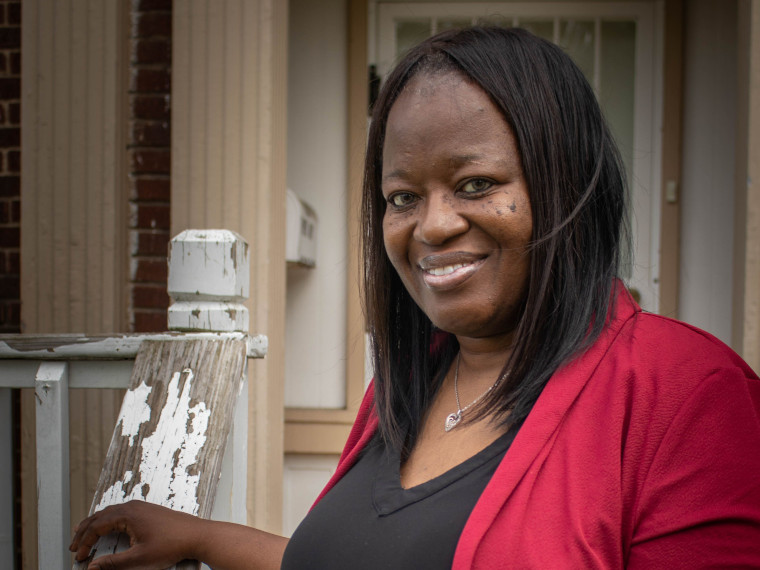 Photo: Jameca Patrick-Singleton     Patrick-Singleton is a current member of the Flint Courier News staff
Written by Jameca Patrick-Singleton
Pam Folts who lives in Flint’s 5th ward, says that though the water source switch that occurred in 2014 did not seemingly immediately impact her, she instinctively knew not to trust the new water source.
“I saw the (then) mayor drinking the water, and I just didn’t trust it,” Folts said.
Folts was right to not trust the water source. Residents immediately started complaining about the smell and taste of their water supply and began to show up at city council meetings with containers filled with discolored water,, claiming to have captured the water from their faucets.
“My children were just as concerned,” Folts said. “They no longer live in Flint, but they sent me a water cooler and insisted that I drink from it”.
In addition to switching the way that she drinks her own water,  Folts said that the new water source started causing problems in her home that she is still experiencing today. Her house came with a 100 year old (original) furnace. Once the water switch occurred, she had to replace the furnace and then four years later, replace the newer furnace. Her house is also on a boiler system, and she believes  the issues with the water cause corrosion to the other pipes in her home, causing crud and corrosion to her entire boiler system that remain today. The issues with the boiler system actually impact her heat and the have caused the floor in her sunroom to buckle due to the moisture underneath it.
Folts also installed a whole house filter that has three levels of filters. One filter is required to be changed monthly, another every three months and the other yearly. According to Folts, when she changes her monthly and three month filters there a half inch of orange, gray and black goo on the filters. Folts feels that this is proof that the Flint Water Crisis is far from over.
Not only is the water crisis affecting her home, it is affecting the way that she socializes.
“I would often hold dinner parties for members of my church. There would be about 10-12 people at each of these parties. I always used all of my nice settings at these party’s. I would use real china, real tablecloths and the nice glasses. After the water crisis occurred I would have these parties and use bottled water. It may seem small, but my entire pace setting was off.
previous post

Schools expected to reopen in fall, governor announces next steps

Back to the Bricks® oganization raises money for the equivalent of 31,377 meals