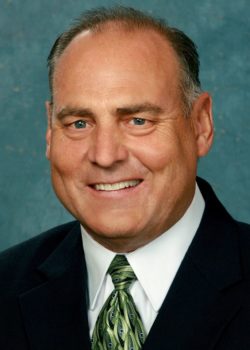 John Gleason, Genesee County clerk and register of deeds, said he believed people should have been invigorated to vote because of the Flint Water Crisis. He asked how a community like Flint can have less than 20 percent of its residents voting for even those who won in its major elections.

“If you can’t vote when you’re poisoned what is going to make you vote?” he asked.

“The Civil Rights Act came about because people in America had enough. They watched the newscasts and saw Blacks were beat. They were trampled by horses. They were jailed,” Gleason said.

Gleason made reference to the freedom rides.

Freedom rides were bus trips made by civil rights activists through the south to protest segregated bus terminals.

In May of 1961, freedom riders arrived on a bus to Anniston, Alabama and were surrounded by a furious mob of about 200 White people. Someone threw a bomb into the bus. The Freedom Riders ran out of the bus as the bomb exploded, only to be severely beaten by members of the surrounding mob.

“There was finally a public perception that we must make African Americans full citizens by giving them both the Civil Rights Act and the Voting Rights Act. Those were both monumental political actions. That was politics that created both of those acts. That’s where Flint needs to get back to saying ‘our town has got to be taken care of.’”

Flint, Michigan’s estimated population is 95,943 according to the most recent United States census estimates. According to the Genesee County Clerk’s website, Sheldon Neeley received 7,082 votes and Karen Weaver received 6,877 votes in the November 5, 2019 Flint mayoral election. Yet he mayor has the ability to hire city personnel.

“When you elect a mayor, you’re electing a cabinet, and every component of your life has a representative sitting on that cabinet,” Gleason said.

As of the 2010 census, a total of 67,704 civilians reside within Michigan’s thirty-fourth state house district. Cynthia Neeley and Adam Ford are running in the special general election for Michigan House of Representatives District 34 on March 10, 2020. In the special primary election held Jan. 7, 2020 Cynthia Neeley received 1,158 votes and Ford received 137 votes.

“It’s scandalous. You have to realize how you got the right to vote. People were lynched. People were beaten. There houses were burned-to give the African American the chance to vote.”

The city council members are the liaisons between the citizens and the administration. They vote on the budget and decide how resources will be dispersed across the city.

“That city council person they take your issues if your garbage is not picked up, if your house is broken into and the police do not respond, if there is a sewer backup or if there is even an issue with the most common concern today; the poisoned water,” Gleason said.

Gleason said in addition to voting for public officials, many Flint residents should pay more attention to proposals on the ballots.

Gleason said it is hard to find counties that have as many millages as Genesee County.

“Yet we have all these people who can’t pay their water bill.”

Although Gleason said because people have not voted they are paying for millages they probably don’t agree with, he does believe the proposals for Flint Community Schools and Mott Community College are critical.

“Education is the foundation,”

Gleason is a student at Mott Community College.

Gleason said the presidential election is critical to vote in because of the “divisive” nature of our country. Still, he said local elections are important, as well.

“Local elections are important because of quality of life. Your costs are typically more defined at the local level than at the federal level.”

Residents tell Gleason they don’t vote because their vote doesn’t matter or they can’t decide on a candidate, but Gleason said there are no perfect candidates. His suggestion for the next Black leader to get people to vote is to run a grassroots campaign and go into homes to have meetings in order to see what matters to the voters.

Gleason referred to James Chaney; a Black civil rights activist, as well as to Michael Schwerner and Andrew Goodman; two White civil rights activists. The three men were working to register Black voters near Meridian, Mississippi Cecil Price; a Klan member who was also a deputy sheriff, pulled them over for speeding. He then held them in custody so other Klan members could arrange for their deaths. Once released, they were chased down in their car and cornered in a concealed area in the woods where they were shot and buried in graves which had been made in advance.

Gleason discussed Nelson Mandela being imprisoned for 27 years for trying to end apartheid and give Blacks a voice in South Africa. He compares Mandela’s sacrifice in South Africa to the sacrifice of Martin Luther King Jr. in America. Mandela was freed on February 11, 1990, making this month the anniversary of his release.

“When he got out many people walked barefoot for two weeks to go cast a vote for Mandela. All we have to do is go down to the local clerk’s office-or we have 30 days to vote ahead of the election with absentee ballots.”

According to Michigan.gov, due to the passage of the statewide ballot proposal 18-3, all eligible and registered voters in Michigan may now request an absent voter ballot without providing a reason.

Chauvin to be sentenced for murder of George Floyd