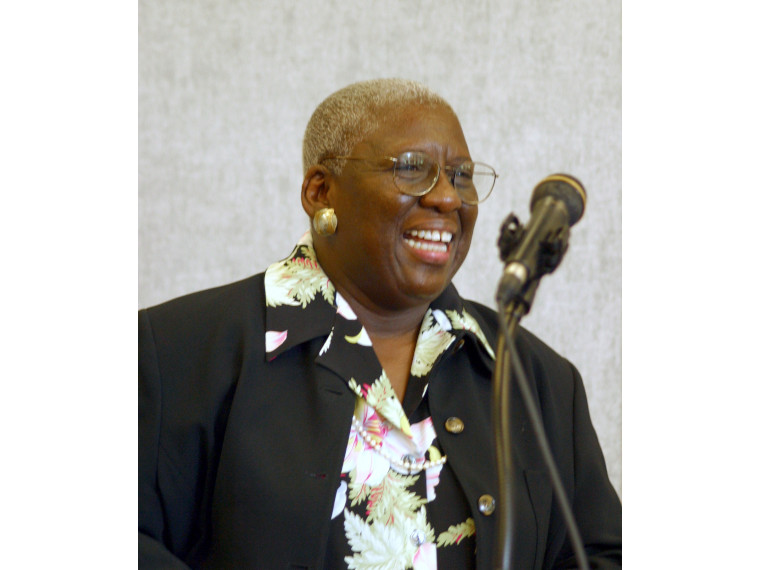 “I was looking and I thought about Aretha Franklin” said Bishop Bernadel Jefferson, pastor of Faith Deliverance Center and active member of the community.

Jefferson said there were many examples of how local individuals had contributed to the Flint community.

“She appeared, and brought forth and made changes,” Jefferson said of Coles.

An Ad Hoc Committee met March 28 at Longway Planetarium with six board members, library staff and approximately 15 members of the public in attendance.

During the committee meeting, the board heard from a dozen or so community members, all of whom spoke about the importance and lasting impact of the work Coles did during her time as director of Flint Public Library. They also spoke about the significance of honorary namings as an expression of the community’s rich history.

Community Member Elizabeth Taylor spoke about how the doors used to be locked when students would get out of school at Whittier Middle School and Central High School, but Coles would unlock the doors. She would encourage the students to help at the library and to get library cards. Taylor talked about how she remembered many things Coles did while serving in her role at the library that had never been done before.

“She made the library what it is today,” Taylor said.

Board members thanked the community for coming forward to discuss the initiative.

“It was very important to provide a forum for public discussion to hear all views on this issue,” said Reta Stanley, board president.

Board Treasurer Brian Larkin and Board Member Dean Yeotis said they loved the passion of those who spoke on the matter.

“I commend all of you for caring,” Yeotis said.

Board Member Audrey F. Young-Muhammad asked whether there were any other buildings named after Black women in the city of Flint. Community members and other board members confirmed there were a lack of such buildings in the community. The Lenore Croudy Family Life Center is named after Lenore Croudy, who died in January 2017. Croudy served on Mott Community College’s Board of Trustees for 29 years

The Flint Public Library Board of Trustees held their regularly scheduled meeting on March 3. During public comment, Norman Bryant and Elizabeth Taylor introduced The Gloria Coles Initiative and requested board support. “The Gloria Coles Initiative” is a request by a group of community members to name the Flint Public Library building in honor of Coles.

As part of the board meeting, a letter from Coles to Board President Reta Stanley was read, in which Coles expressed reservations about the initiative. Coles expressed that she wanted the focus to be on the library reopening, rather than on herself.

The board agreed to consider the matter further. The board president appointed the Ad Hoc Committee to solicit further public comment and to discuss the Initiative.

E Hill De Loney, a nationally recognized pioneer and expert in community-based participatory research, told the committee about how she did not originally want to accept the honorary degree she was awarded by the University of Michigan.

De Loney said she, like Coles, is a very private person. She did however say she was glad she was persuaded to accept the honorary degree because of the impact it has on youth, who often lack representation.

The Flint Public Library Board of Trustees next meets on Thursday, April 7 at the Flint Institute of Arts in the Sheppy Dog Room (studio wing). As always, the public is welcome to attend.

Opening weekend for the newly renovated Flint Public Library, 1026 E. Kearsley Street, is May 19-21. The building located at the corner of Crapo and Kearsley was dedicated in 1958. The Library closed February 29, 2020 for a total renovation. The Flint Public Library was established in 1851 before Flint became a city, by the Ladies Library Association.