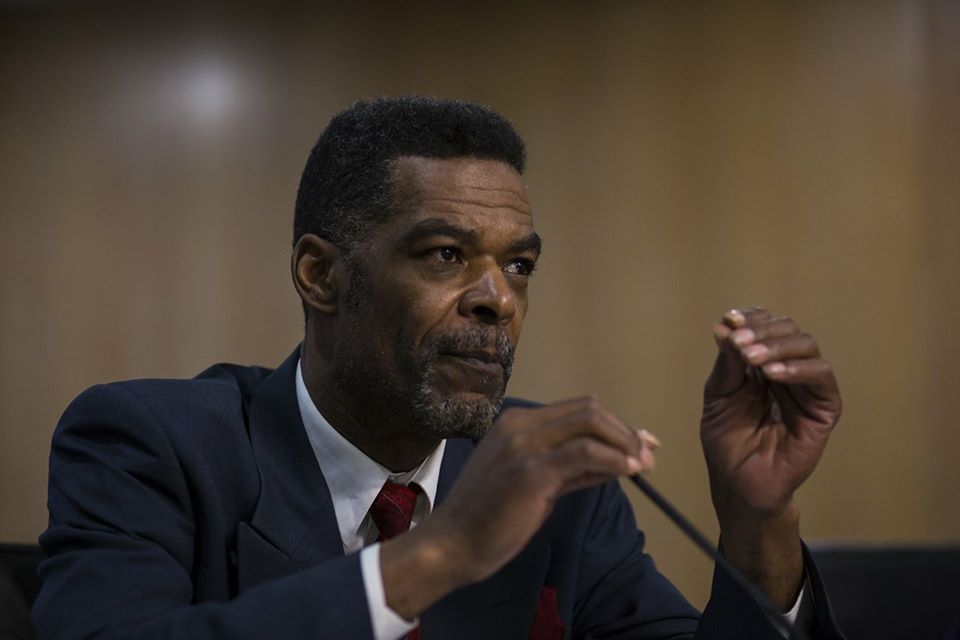 Photo: Flint City Councilman Eric Mays, who was escorted out of a recent special meeting by police

Flint City Councilman Eric Mays cried out “this is outrageous” and threatened to sue the council president moments before he was escorted out of a special city council meeting by police at a recent special meeting. The meeting was called by Mayor Sheldon Neely  after council was unable to vote on 11 agenda items at their last general meeting.

“I’ve been removed by police wrongfully a number of times,” he said.

He challenged those attending the meeting to “look at the tape,” saying he was wrongfully removed from a meeting on Jan. 23.

Councilman Maurice Davis applauded residents in the fifth ward for coming to the meeting and speaking out about a development they did not want in their neighborhood.

“It’s a historic district. It should remain there. I’m over in Civic Park District, as well. We’ve been begging for development over there. We would accept the one you don’t want over here on University. But, they won’t give it to us. You know why? First ward and second ward-whether the residents know it or not-is designated as green space,” Davis said.

Mays asked whether Davis was aware that under the master plan for the city of Flint the two wards were no longer specifically designated as green space.

“We stopped that,” Mays said.

Galloway said that was not a proper point of information.

Galloway told Mays she would give him one warning.

Mays appealed. Galloway told the council there was an appeal of the decision of the chair on the floor. The appeal died due to lack of support from the other city council members.

Mays appealed Galloway’s decisions throughout the meeting, getting no support for his appeals from the rest of the council.

“So you’re saying I have one warning for asking that point of information?” Mays asked once he had the floor.

“I told you it wasn’t a proper point of information and you wanted to argue with me. I’m not going to tolerate you arguing with me. If you continue to argue with me-now you have one warning. You appealed it and you lost,” Galloway said.

When asked by Galloway what his point of order was Mays said he appealed the point of information.

Galloway said that’s not why she gave him the warning.

“I gave you the warning because you continue to argue, and I refuse to argue with you,” she said.

The council continued to handle other city business.

Mays requested the city administrator answer questions he had about resolutions in the agenda during a motion to move the master resolution, which Mays separated as agenda items.

Galloway said the time the city administrator spoke would not be considered part of the limited time debate allocated to the council members.

“His time is not included in your time, but I will limit the debate if it goes too long,” Galloway said.

“It’s not accounted against him, but my time, when I start if I back and forth after five minutes…my time is up. I will find it if you need it,” Mays said.

Galloway told Mays she did not need him to find the information.

“I just said that. I just said his time does not count in Mr. Mays’ time. I read the rules. So, you and I are saying the same thing. I don’t know what point you’re trying to make,” Galloway said.

Mays suggested Galloway warn Councilman Maurice Davis for arguing with her after Davis confirmed how much time Mays had to speak.

“He didn’t argue with me,” Galloway said.

Mays argued warnings should have been issued because the council was not following rules in place about standing up during a motion.

“So the error is mine, too. He should know the rules, but he did as for permission,” Galloway said.

“Can you warn yourself for the breach of the rules because in the back of the rules it even talks about you being held accountable?” Mays asked.

The residents applauded Galloway for warning herself. Mays asked what the penalty would be.

“Mr. Mays, you clearly are not paying attention because you are ready to fight. I just said I am willing to take a warning. What I will tell you is you are beginning to abuse point of orders. I said I would take a warning with you. But, sir, I am telling you that you will not breach point of order or point of information. I want you to listen. You are so used to people fighting with you that you didn’t even hear me say I will accept a warning,” Galloway said.

The tension escalated after Mays questioned the city administrator about a press conference he saw in which Neeley said he would clean up blight in the second and fifth ward.

“We did a budget, and we did a budget for all nine wards. I’m taking offense that I’m hearing the mayor say, and I wish he was here; he’s going to concentrate on two wards. I want to make a referral through you to the mayor, Mr. Edwards. I got stuff that looks like a dump yard’s been dumped on Russell Street,” Mays said.

“I don’t want to see the other wards clean when we budgeted for all the wards” Mays said.

Mays asked if Raul Garcia had been fired from his position of blight director of the city, to which Edwards said he had no comment. Edwards said the mayor is willing to work with all wards in regards to blight, but was merely starting two wards.

“I want to see who and what when in the first ward,” Mays said.

Mays said he didn’t have to “play ping pong” with eight other council people trying to prove they were smarter than him.

“They take care of each other and leave me out here like a fool,” Mays said.

Galloway told him he was not speaking about the topics of the meeting. Mays continued to talk about matters other council members said was not relevant and was called out of order by Galloway. Though Mays appealed her decision to call him out of order, Mays’ appeal again died for lack of support. Galloway said Mays could be escorted out of the meeting by police or he could leave on his own.

“I’ll take the escort because I’m going to sue. You can’t remove me from my elected seat for trying to talk about a motion. This is outrageous!” Mays said.

Mays repeated that having him removed was outrageous several times.

“Every time we get on business they’re making bogus, discriminatory rules and just making up rules! This is ridiculous!” Mays said.

Galloway said towards the end of the meeting after Mays had been removed that the council members should not let their emotions control them, which she said she has been guilty of herself. She said sometimes when only five council members were there until 11 p.m. with Mays meetings have also went well.

“I just want us to work fairly with each other consistently,” she said.

I-475 Reconstruction In Genesee County Is Underway