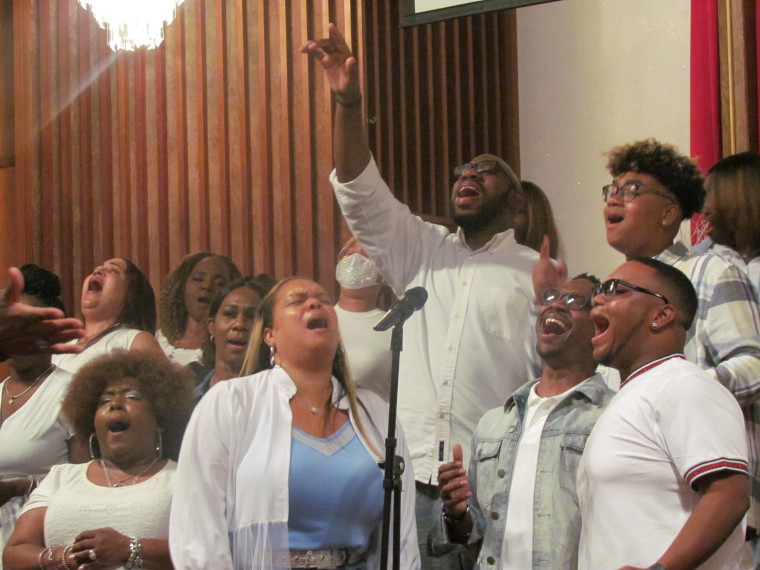 It has been a quarter of a century since Bountiful Love Ministries, on Pasadena Avenue, has been in the business of blessing those within and outside of the Flint community. So, those who plan for and attend the church made sure the church’s recent 25th Anniversary Celebration was one to remember!

A Meet and Greet was held on Friday, July 15 in which former members from across the country reunited with current church attendees.

The next day, a “musical” took place Saturday, July 16 at the church, which featured praise dancers in colorful costumes or with dance ribbons and performances from many amazing singers and groups around the area, as well as from the city of Detroit.

“It was great being back at my home church,” Brown said.

Brown shared he was at Bountiful Love the first couple years after the church opened and transitioned from the back building to its current building. He was then called to do pastoral work for a particular group of people. He is currently doing ministry and pastoral work in the Saginaw area under Alvernis Johnson. Brown expressed he feels the music ministry at Bountiful Love is “still one of the best in the area.” He called the anniversary celebration “refreshing and “a good time to connect with family and friends.”

Shanta Smith of the Christian rap group TBAR performed as part of the musical. Smith has been attending Bountiful Love for over 16 years. Smith told the Courier he used to attend the church of the pastor of Bountiful Love’s brother. That church was located in Vassar, Michigan.

“I was a young kid always in trouble, and my mom started going to his church out in Vassar, and they were trying to lock me up because I was in foster homes and stuff like that,” Smith explained. “Pastor Harold, Kevelin’s brother, came to one of our visitations and gave me $50 ripped in half. He said ‘you come to church, you’ll get the other half.”’

This was Smith’s first introduction to the Jones’s, who he has been knowing since about age 15.

Smith did end up with felonies on his record, but he is one of many who says Bountiful Love has had a positive impact on his life.

“I was lost; I had no idea who I was,” he said. “I had dropped out of school. Since I rekindled my love for God in Christ, under the right tutorship, I got my bachelor’s in social work. I got my master’s in criminal justice. Going to church has totally transformed me from somebody that was in the streets that had no idea who he was-into a grown man that’s married with children that’s actually giving back to society instead of taking away from it.”

Smith said he was honored to be able to perform with fellow TBAR member Antione Brown. Together, they danced livelily and jumped, giving praise to God for their testimonies. Smith said he recalls a time when only singers could perform at church reunions.

A definite highlight of the musical were songs performed by the Tribe of Judah Reunion Choir. The choir had not performed together in over a decade! A group of individuals do perform as part of the church’s Praise Team on a weekly basis, however.

“To sing with the choir again after the church has been in existence for 25 years was supercharged,” said Tanisha “Lady T” Jones, who the first lady of the church and married to the current Senior Pastor Kevelin B. Jones Jr.

“It was energy,” she continued. “The presence and the anointing of God led us in the room. We began to get ready for this event. People were anticipating singing the old songs that we sung in the back building of this church…So, coming together and singing the songs we sung made us remember all the wonderful times we had together!”

Two of Jones’ children also sang in the reunion choir who were not around for the original Tribe of Judah, along with many other youth.

The exhilaration of the celebration continued with Official Day at Bountiful Love Sunday, July 17, which featured more beautiful singing and praise dance. The master of ceremony was Elder Nicholas South, National Church of God in Christ Scribe.

Brenda Mcgee, who attended Bountiful Love from 1999-2008 and now attends Kent Street Church of God, described the service as “riveting.” She especially enjoyed the message, the choir and the praise team.

“Those people can sing!” she said. “They are a great group of people, and God has gifted them to sing.”

Mayor Sheldon Neeley and Rep. Cynthia Neeley made an appearance. Elder Ricky Callaway of Flint’s Covenant Worship Church, who was the best friend and assistant pastor of the founder, presented the message about “good and bad trouble,” in which he also mentioned the Story of the Prodigal Son. An approximately nine-minute video was also shown of Bountiful Love Founder Kevelin B. Jones Sr., who died due to COVID-19 March 26, 2020.

The video featured footage from the “back building,” the COGIC National Convention and the last family dinner and message Kevelin B. Jones Sr. shared, among other footage.

Kevelin B. Jones Jr., in tears, stated his father started the church at the Ramada Inn.

“My dad was a blessing to so many,” he said. “He bought cars and houses and tore up his own car. Nobody knew how much the family went without (so others could be helped). But now I understand.”

Kevelin B. Jones Jr. said he was thankful for everyone who attended the anniversary celebration to make it a great event.

“Folks who came out from North Carolina, Florida, Texas, to be with us,” he added. “I really thank my team here at the church for ensuring that everything went off without a hitch…I’m very happy, very pleased…”

Mother Iola Jones, the wife of Bountiful Love’s founder, also spoke to the Courier about receiving a monetary gift from attendees following the musical Saturday.

“I was so surprised,” she said. “I wasn’t looking for anything for me. I was just here to get through these two days that touched us all so much! I really felt good about them thinking of me. My son and my daughter have never left me out of anything.”

Mother Jones said she feels good about her son Kevelin B. Jones Jr. being the church’s new pastor.

She also said she was “so happy” Mayor Sheldon Neeley and State Representative Cynthia Neeley took time out their schedules to offer a letter of support to the church.

Although Mother Jones said it had been rough since her husband, Founder Kevelin B. Jones Sr., died- because he was such a special, loving, caring and unique person, she said each of her children has pitched in to help. She also called the 25th year reunion celebration a “light for her life.”

“Seeing the people coming from over the airwaves or wherever they came that were involved in this ministry, it made me feel like a mother hen!” she expressed. “I was so excited to see so many wonderful people! My husband planted into their lives, and they wanted to come back and share with him. I cried tears that were different tears than I cried when we took him to the grave site. I felt bad the last two years because I couldn’t honor him the way he should have had.”

Mother Jones said she is grateful to Kevelin B. Jones Jr. and everyone who made it possible for her to now, during and after the celebration, shed tears of joy.

How to work out without excuses

Fifteenth Annual Back to the Bricks Is A Rolling Success