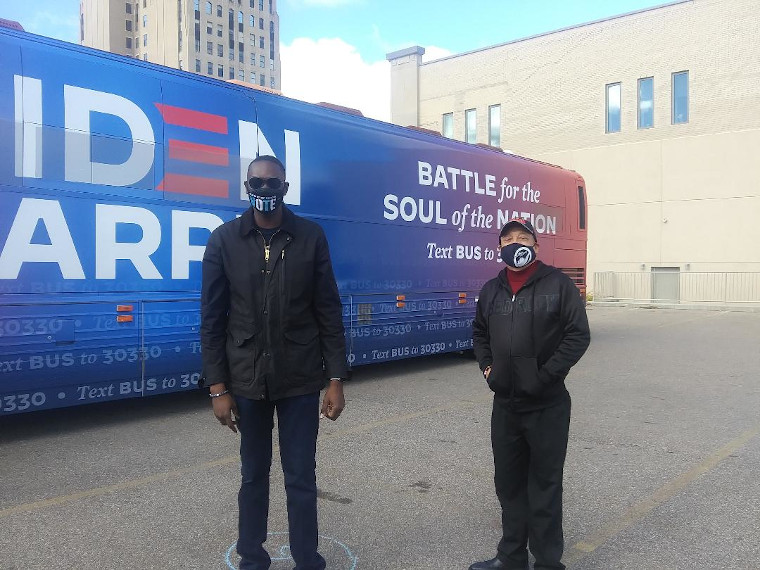 The energy seemed to be contagious as Lieutenant Governor Garlin Gilchrist II stopped to take part in a rally and swag giveaway in the parking lot of the Flint Famer’s Market in continuing his trip across Michigan on the Biden campaign’s Soul of the Nation bus tour. Gilchrist pointed out more people have voted early in the Michigan than have ever voted early in the state’s history. He challenged those in attendance to get others to vote, saying they could even get 100 people to vote by doing something as simple as sending text messages, calling on the phone or having in-person conversations.

“People are telling me they’re voting because they’ve said goodbye to more people than I have from the pandemic,” he added shortly after saying he has lost 23 loved ones this year.

“People are voting because their favorite business, or the business that they even own has struggled because of the economic collapse due to the Trump administration’s failure. They want empathetic leadership. They want someone who is going to be a partner for Gretchen Whitmer and me in Washington, rather than someone who insults or threatens us on almost a daily basis. So, they’re really motivated to get some change out of Washington, too.”

Voting has been going on in Michigan since September 24, and Michigan is a critical state in this election.

Mayor Sheldon Neeley said he made a point to be there for the bus’ stop because there is a battle going on for the soul of the nation and it was an opportunity to talk to the American people about celebrating the greatest American right they have.

Neeley reminded Flint residents they may drop their absentee ballots in one of the city’s drop boxes. The city maintains two drop boxes on city property: one in front of Flint City Hall and one between the police and fire departments on 5th Street. Both are available for secure absentee ballot drop off with 24 hour access and security, according to the city’s website. There are also drop boxes installed at four of the city’s fire stations, as well as six other locations.

Senator Jim Ananich, of the 27th State Senate District, brought his son to the rally.

“I’m working these next ten days, and have the last many, many months because of him,” Ananich said.

He encouraged those in attendance and others to also flip over their ballots and vote on the non-partisan section.

Congressman Dan Kildee (M-05) said this election is the most important election in the life of our country. He encouraged those in attendance to reach out to those we are not sure voted, letting them know how important it is to them they vote.

“The state learned that about two and a half weeks ago when the court ruled 4-3 that the governor did not have authority to issue orders in response to the pandemic,” Welch said.

She said McCormack, who is seeking re-election, is doing a great job, but said this was the moment to make the courts more fair and balanced.

Harold Woodson, a Flint resident, said a lot of individuals who attended the rally had already voted or committed to vote.

“But, then you might get somebody who’s not sure what they want to do at this point,” he added. “I think anything you can do to get anybody to vote is good. I’ve been voting since I was 18. It’s one of the most responsible privileges we have. If you don’t vote, you don’t have a voice. If you don’t vote, I don’t want to hear what you have to say about some of the issues. It’s like wearing a mask. Two things everybody can do are wear a mask to help keep everybody safe and vote for our democracy.” 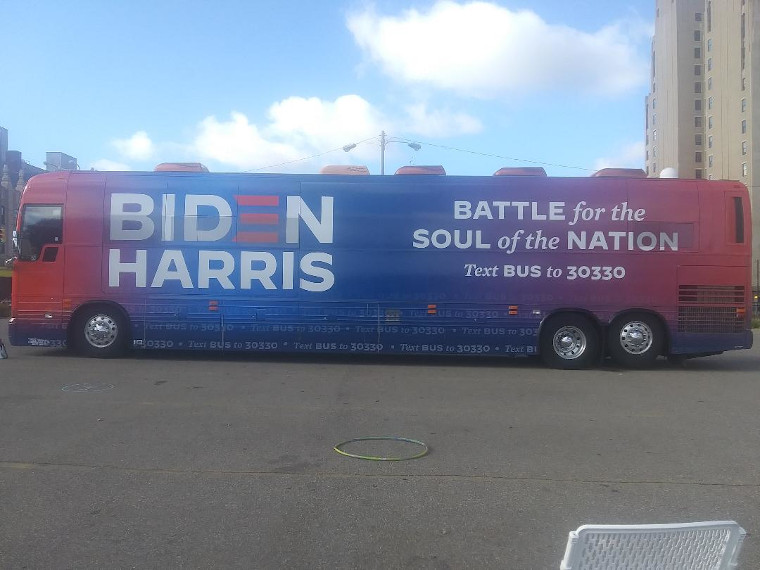