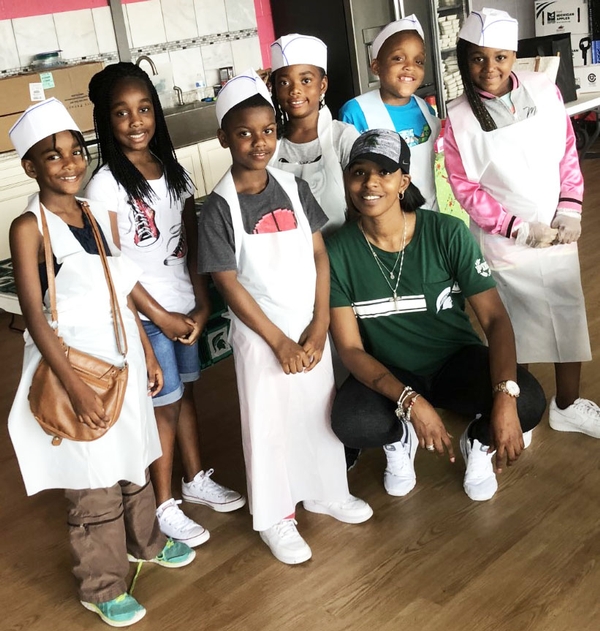 It’s the first day of the “Show Me Nutrition” program at the Sylvester Broome Empowerment Center in Flint. Before the class starts, about 20 young children, all around eight to ten years old, fidget and giggle and chat at their tables. LaShanda “Shane” Jackson, a community nutrition instructor in Michigan State University Extension’s Genesee County office, stands at the front of the classroom.

“We’re going to do some taste testing in this class,” she announces to the group at the start of class. “And we’re going to learn a lot of things about nutrition and your bodies.”

The kids may be a little rowdy, but when Jackson speaks, they quiet down. She begins her first lesson, asking the children about the colors of the rainbow and if they can guess what red food is good for.

Many of the kids’ expressions change. “Your brain? Really?” one boy asks incredulously to his friends around him. As excitable as the kids were a few minutes ago, it’s clear the four-year veteran of MSU Extension has their attention now.

Jackson knows exactly how to reach children. After all, she considers them her own, in a way.

As the lesson progresses and the kids engage more — it’s clear that Jackson is in her element. She laughs along with the children as they try to name all the orange fruits and vegetables they can. Then yellow, green, blue, purple.
Maybe it’s because she doesn’t teach for the recognition that made it all the more special and unexpected when Jackson was acknowledged publicly for her extraordinary work.

In June, Jackson was awarded FOX66’s Golden Apple Award — an honor given to one deserving mid-Michigan K–12 teacher who goes above and beyond in the classroom. As a community nutrition instructor, she delivers health and nutrition programming to students throughout Genessee County, helping further MSU Extension’s mission to help people lead healthier, safer lives.

Jackson took home the lion’s share of tens of thousands of votes to beat out 26 other outstanding educators. She received the honor at a surprise meeting.

“I was just thankful to be nominated and when I hadn’t heard back by that Monday, I moved on,” she said. “So on Tuesday I show up to this work meeting ready to take notes. All of a sudden this big light hits my face, and it’s a news crew with a camera. I just couldn’t believe it.”

Jackson was nominated by Mary Ann Kost, a teacher at Hamady High School, who collected and distilled input from some students that Jackson teaches.

“Yes, she introduces students to healthy eating strategies, interesting and delicious food and food preparation and cooking techniques that are essential for young people,” the nomination form stated. “But what is exceptional about Ms. Jackson is how engaging, warm and welcome she is with students…[h]er passion for healthy eating and good food is very evident.”

This passion was an accidental discovery. Years ago, Jackson was pursuing a career in nursing, until one criminal justice class changed the course of her career.

“I remember learning about the correlation between poor nutrition and the criminal acts that people commit. And that’s what just fascinated me about food,” she said.

Later, a car accident that left Jackson injured opened her eyes further to the tremendous power of nutrition.

“I started healing myself through food instead of pain medication, paying attention to what helped inflammation and things like that,” she said. “I realized that nutrition is life.”

Jackson brings this philosophy into the nutrition classes she teaches all across the Flint area, which take her to about ten different schools each year. She delivers lessons to hundreds of children as well as adults who are developmentally disabled or recently released from incarceration.

Jackson can easily recount some of her biggest success stories. A man with multiple sclerosis struggling to keep weight on who gained 20 pounds – and some much-needed energy — by adding berries and omega-3 fatty acids into his diet. Or the troubled teen grappling with anger issues who now can calmly tell his mother — who can hardly believe his behavioral improvement — when he needs an emotional time-out.

“He didn’t know how to handle his pain,” Jackson said. “When I saw he was a little standoffish, I knew he was going to be my special baby. I started engaging him and he slowly came out of his cocoon. By the end of the class, his mom was so impressed at how changed her child is. He’s not acting out or slamming doors anymore. She just couldn’t believe it.”

It’s this deep, genuine care for her students that secured Jackson’s winning spot in the Golden Apple competition.

“Every week students look forward to her return,” the nomination form concluded. “Every week, she doesn’t disappoint. Every week, she has an inspiring story to share, interesting and new food to share and a sincere heart and willing spirit to be with students and help them succeed as much as she can.”

When she hears those words read back to her, Jackson gets emotional.

To learn more about the types of health and nutrition programming offered by instructors like Jackson, please visit MSU Extension’s Food and Health page.

Flint Families Can Get Nutritious Food at Mobile Pantry in August