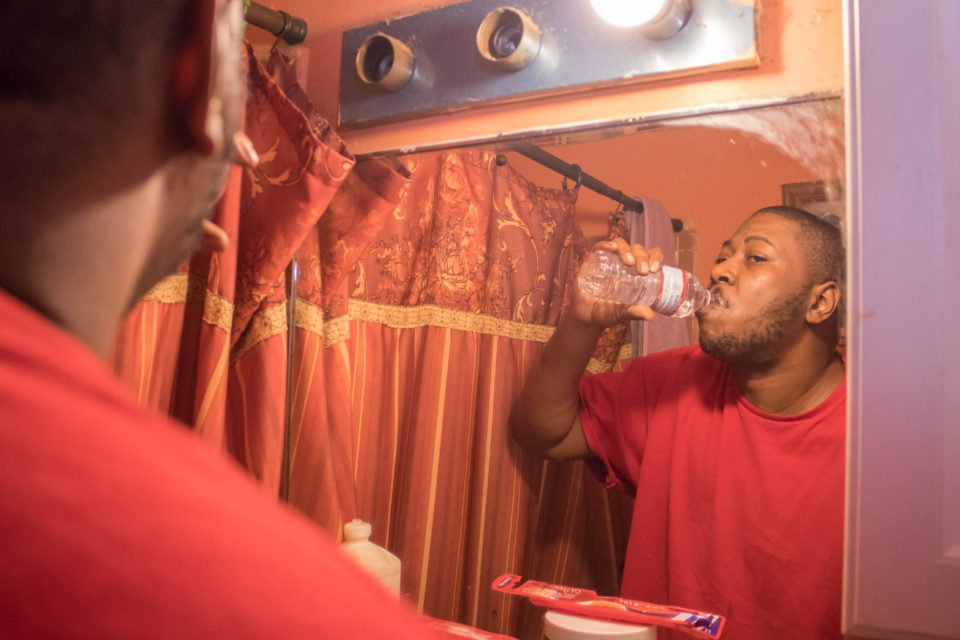 Photo: The Simpson family is one of numerous Flint families still using bottled water to brush their teeth.

Makela Simpson is a 42-year-old wife, of four and grandmother of three. Simpson’s family, like any other families in Flint, still struggle with the community devastation commonly called the Flint Water Crisis. According to Simpson, the water crisis hit hard and fast

“We were barely able to complete daily tasks. I couldn’t cook or use the water to wash my daughter’s hair.  I even struggled with washing dishes because I didn’t know how it would impact my family,” Simpson said.

Simpson describes her daily life at the beginning of the crisis like something out of a war movie.

“There were military personnel driving up and down the streets delivering water. You could also go pick up water from the fire stations. It was crazy. I remember driving past a closed gas station and seeing someone in a parked truck passing out water. I remember this day vividly because for some reason this was my breaking point. I just broke down crying, and I couldn’t stop. I don’t know if I was crying because I was grateful for all of the help or crying because I was overwhelmed by the situation. Maybe it was a combination of both,” Simpson said.

For the Simpson family, the devastation from the water crisis still exists today.

“It has been horrible. We are still breaking out in rashes from washing our bodies with the water. We can’t brush our teeth with the faucet water. We have to use bottled water to do everything. I bathe my grand kids in bottled water just so they don’t break out. It’s hard.”

Simpson said her outside pipes were replaced but she is frustrated that nothing has been done with her indoor plumbing, appliances (such as her hot water heater) or faucet fixtures. She stated that she does not trust the water in restaurants and that she and her family have no faith in the government.  Simpson stated that though she purchases most of the water that she and her family uses she does occasionally go to some of the water distributions from the local Help Centers. She said that she finds waiting in lines for free bottled water to be both time consuming and humiliating.

“We are waiting in line like we’re asking for hand outs, and all we want is clean water. This is America. It’s crazy that we have to live like this. Our water was poisoned, and we’re just trying to figure out how to make it through this storm and how to save our children from the impact of the water effects.”

Jacquevis Patrick is a 29-year-old African American male that lives in Flint’s 7th ward. According to Patrick, the Flint Water Crisis was initially little more than an inconvenience for him.

“At the time that the water switch occurred, I was living in an apartment in the 5th ward,” he said.

People would bring us water or we would go to one of the many places that people gave it out. I hated what was happening in my city, but I assumed that it wouldn’t impact me as bad as it impacted some others,” Patrick added.

Sadly this was not the case. In May 2018, Patrick moved into a house in the 7th ward. He stated that in early June 2018 he went to the emergency room suffering from intense shortness of breath. After doing x-rays doctors were immediately concerned because he appeared to have double pneumonia and initial tests couldn’t confirm the exact type of pneumonia.

Patrick said things only got worse after that. He spent over a week in the hospital, spending much of that time in intensive care-with a machine breathing for him. According to him, there was even a point that his doctor warned his family that he may not make it through the night.

Patrick says he now spends his time living life to the fullest.

“I almost died. So, I feel like I appreciate life more.”

He believes that his pneumonia was a result of consuming tainted water.

Nowadays Patrick can only drink purified water. He has been advised by his doctors not to consume filtered water from the tap, or any other forms of bottled water.

“I get sick a lot with lots and lots of lung infections. When I’’m not sick, I’m frustrated. There have been times that I’ve had to go to multiple stores to find the only kind of water that I’m able to drink”.

Life for Patrick  has forever changed.

“This crisis has forever altered my health and the way that I live”.

To share your story of how the Flint Water Crisis is still affecting you, please contact us at Courier.FlintWaterCrisis@gmail.com. You may also call Jameca Patrick-Singleton; project manager, at 810-397-5885.