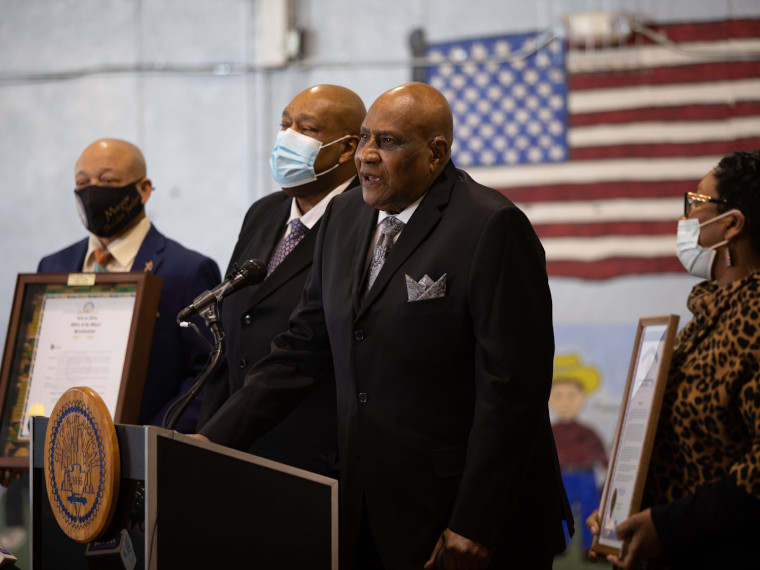 Featured photo: Speaker Joe Davis; Flint’s first firefighter for the City of Flint Fire Department, was among seven recently recognized for their contributions to the Black community at Flint Development Center.

Ujima, pronounced “oo-JEE-mah,” is the third principle of Kwanzaa and means “collective work and responsibility.” All the honorees have shown they share these values, without a doubt.

The late Dr. Nathel Burtley was honored. Burtley; Flint’s first Black superintendent of Flint Community Schools, dedicated his career to teaching and empowering students. Burtley died the morning of Monday April 6, 2020 at Hurley Medical Center, in Flint. Coronavirus was the cause. He was 79 at the time.

Burtley’s wife; Kathy Burtley, accepted the award and keys to the city on her late husband’s behalf.

“COVID not only caused us to wear masks, social distance, stay away from loved ones, not receive those hugs and handshakes that we motivate us to keep going.” she said “But he went into the hospital and he was there for three weeks. Three weeks of being isolated from him was like doomsday, but receiving this award today was the reminder that I need at this time.”

Kathy Burtley said receiving the honors on Nathel Burtley’s behalf reminded her of the mayor, the city of Flint, the people he worked with and worked for, as well as many who were in the crowd during the awards presentation. She expressed gratitude that the impact her husband’s work had would be lasting, and said getting the award was like getting a bear-hug from the community.

The late Ruben Burks was also honored. A longtime community activist, in 1998, Burks became the first African-American international secretary-treasurer. He was a leader in Flint-Genesee Economic Development, a cooperative effort by labor and business. He died April 6, 2020 at the age of 86, in Flint. The cause was again coronavirus. 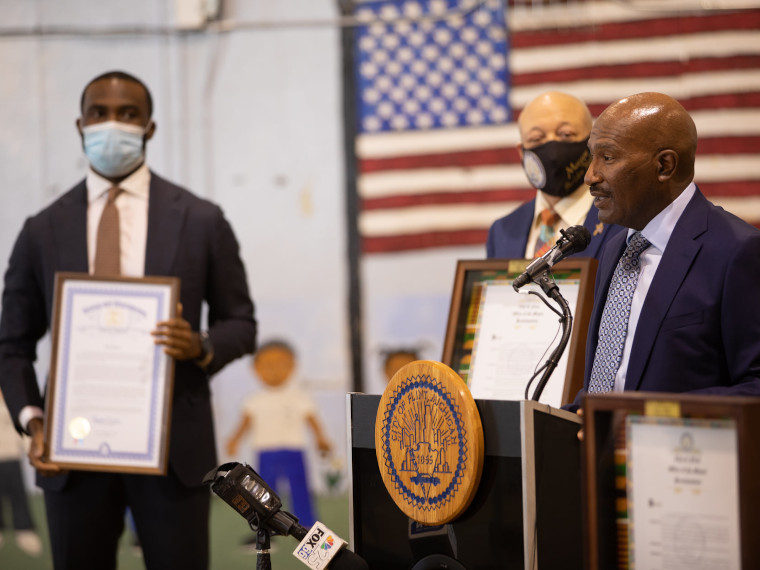 Dr. Larry Young said his father was born in the rural, deep south.

“Poverty, illiteracy, unemployment was the norm for us, as African-Americans,” he said.

But Dr. Larry Young said his father wanted something better for himself and his family and moved north.

“He was the rock of our family,” Young said. “He left a legacy of hard work and honesty.”

Young said this led him to a career in medicine. He pointed out many in the family had left the city and state for their college educations, but they returned to Flint. Young said he and his son learned from his father: “It’s about the people of Flint.” 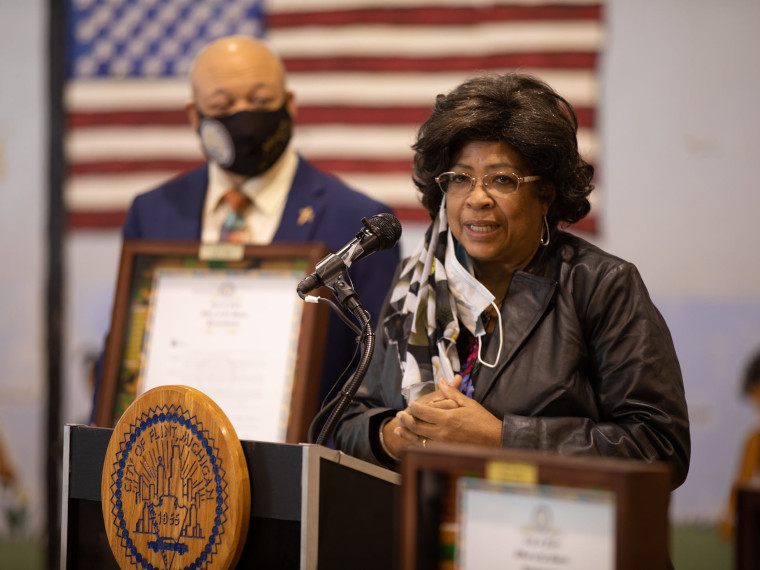 Cleora Magee previously served for 11 years as executive director of the City of Flint Human Relations Commission and for 16 years as community organizer and neighborhood service center manager for the Urban Coalition and Flint NIPP. She has been a resident of Flint 57 years.

Magee said she used to call the Human Relations Commission the “soul of the city” because of the things it did that not only worked towards human and civil rights, but also worked towards equity for families who couldn’t get their water on or didn’t have heat in the winter.

“I am so pleased today to be honored for doing a job I truly loved,” Magee said.

She said the jobs she worked at over the years were jobs she truly loved that never felt like a job but felt like an honor to do.

She also said she was proud to have had the opportunity to have helped create the “wonderful facility” in which the presentation took place.

Norm Bryant is the founder and former owner of the historic Bryant’s Barber Shop. He also founded the Greater Flint African American Sports Hall of Fame for Black athletes from the Flint area.

Bryant described himself as a “doer.”

“We need to know our history,” Bryant said.

Bryant said although to some Flint is known for producing cars “Flint has an assembly line of athletes that you just wouldn’t believe!”

“Years ago, we used to fight for what we wanted, and I’m a go down swinging,” Bryant said.

He added: “We need to teach Black history at every school in this city.”

Floyd and Brenda Clack both served as Genesee County commissioners and state representatives for Michigan, in addition to being advocates for social justice and youth initiatives.

Brenda Clack helped write the program and select the book to be used for the Black history studies for the Flint Community Schools. She always told her high school students to teach their children what she had taught them.

When Brenda Clack came from Memphis, Tennessee she thought Flint was a “country town” and didn’t think she would be here long.

“But, it was a camaraderie with the people; The education system was superb-and for that reason-and I was a part of that-I said I am not going anywhere,” she said.

Clack said she had two things to be proud of. She was responsible for and sponsored the Smoking Ban Bill for the state of Michigan for restaurants.

“The other bill had to do with foster kids and kids who had fostered (or aged) out the foster care system,” Clack added.

Clack said now kids can stay in the system until they are 21 years of age.

Floyd Clack is originally from Texas. He said growing up his plan was to move to California. He taught in Wisconsin, and said moving to Flint was one of the greatest things he ended up doing. In Flint, he worked at Buick, at Fisher Body and as a teacher.

“We certainly appreciate the opportunity that we ended up in Flint,” Floyd Clack said. 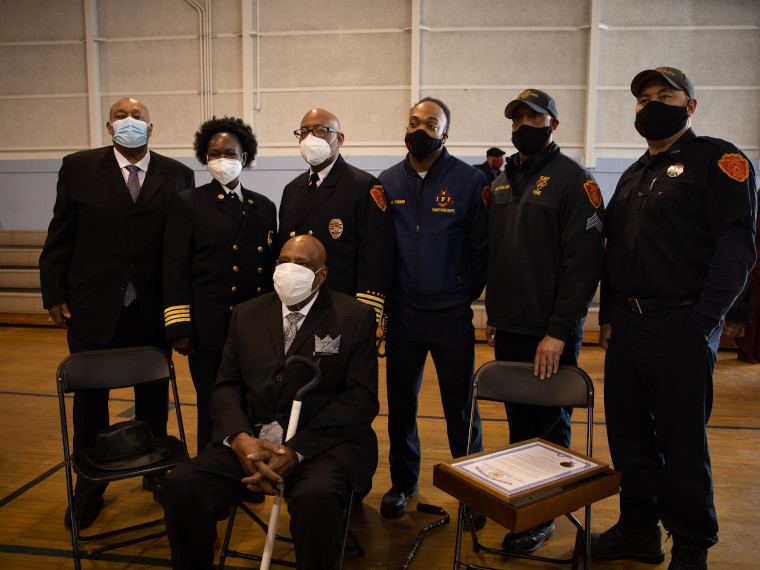 Joe Davis was Flint’s first African-American firefighter for the City of Flint Fire Department. He worked from 1961-1975 as the only Black firefighter in the department for almost 15 years before the next person of color was hired by the department.

Davis, grew up in the slums in Birmingham, Alabama and experienced the death of his father on Davis’ birthday; July 9, 1946, creating additional hardship for the family. Davis served in the U.S. Army after high school and saluted the American flag at the presentation.

Davis came to Flint in 1956. He fell in love with the city and became employed by GM-Flint.

“When I joined the fire department in ’61 I had no idea there were no Blacks,” Davis said. “I didn’t come looking for that. I came looking for a job.”

Davis said he had never known about segregation because his parents never talked about it.

“I didn’t realize I was being discriminated against; It was just a way of life-until later on I began to learn these situations had existed,” he said.

Davis said it felt good saving lives or property here in the city of Flint.

“Regardless of how bleak the future may appear to be stand together with the good apples from that bush. The bad ones, pay them no attention.”

Neeley said there is something to be said about our community. He said the honorees all had a special DNA and engaging that DNA was what is needed for the fight we have in front of us.