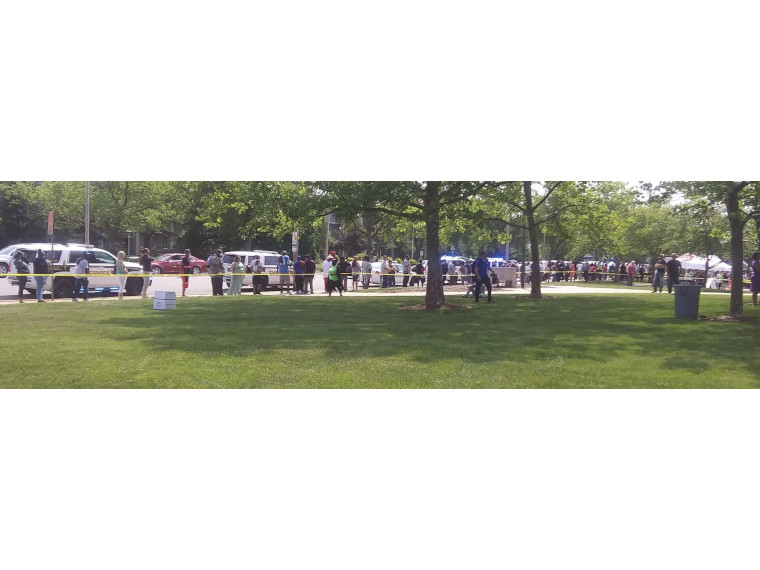 Genesee County residents who had made a variety of mistakes in the past expressed gratitude because their records were being expunged at the first of many expungement fairs that will take place across the state. Some waited for this often life changing opportunity in a line that stretched around the block for hours. Public officials also spoke positively about the event and its purpose.

Aaron Duval said it was “great to have another opportunity to get a better job and start fresh in the present.” Duval said he had a “rough past” but he has changed since then.

Duval said the new laws about expungement were right and fair.

“It gives everyone a second chance.”

Destiny Smith also stood in line to have her record expunged June 2.

Smith explained she “only had parking tickets,” but “probably had a warrant” because she had been unable to pay them. She also said she felt it was right and fair to give her and others who waited patiently for the opportunity an unmarked beginning.

Michigan’s Clean Slate laws took effect April 11, and eligible individuals were assisted in obtaining expungements for misdemeanor marijuana convictions, as well as other eligible felony and misdemeanor convictions. Because of the laws, Michigan residents convicted of up to three felonies other than some serious felonies or a life offense can qualify for expungement.

Congressman Dan Kildee (MI-5) pointed out the people of Flint have a long history of seeking justice-justice for people who have been overlooked and justice for residents who under the previous administration were poisoned by their own government.

He also said he believed those lined up to have their records expunged were acknowledging a mistake in their past and were ready to fully contribute everything they have, everything they can-to the goodness of our society.

“I believe that because so many people who come through the criminal justice system and end up with convictions are not criminals,” Leyton added. “They’re just human being who made a mistake, and so over the past number of years that I’ve been in office-privileged to be in office-we’ve worked with our legislative representatives to allow more folks to be eligible for expungement.”

Leyton said it was not easy to get the legislation through and onto the governor’s desk.

Mayor Sheldon Neeley spoke, saying God must be acknowledged in allowing the event to happen.

“You should never be defined by one mistake for the rest of your life,” he said.

Michigan Attorney General Dana Nessel said for many of the officials there, when they ran for office, their commitment was to bring government to a place where they were working for the people of this state once again.

Governor Gretchen Whitmer said there was an incredible group that had come together to make the day happen.

“We’re here to create some expungement opportunities for people so you can have a second chance at a good life right here in Michigan,” she said.

“The process of clearing criminal records has been too narrow, too difficult or too expensive for too long,” he said.

Michigan Secretary of State Jocelyn Benson urged those in the line for expungement to also get registered to vote.

“Your vote matters,” she said. “Your voice matters.”

She said those with criminal convictions could still vote.

“You have access to that fundamental right: your right to vote.”

Genesee County Sheriff Christopher Swanson said the day marked the day in history when the lives of at least 718 people would be set free with dignity restored and family trees changed forever.

He spoke of the IGNITE program (Inmate Growth Naturally and Intentionally Through Education) because of which there were “countless” testimonies of inmates getting a sixth, seventh or eighth grade education within a safe environment. The program was launched inside the Genesee County Jail last September. Through it, inmates can also earn their GED, enroll in college courses and more.

COVID-19 vaccination and voter registration were also available at the expungement fair.

A December to remember; cherishing the spirit of giving