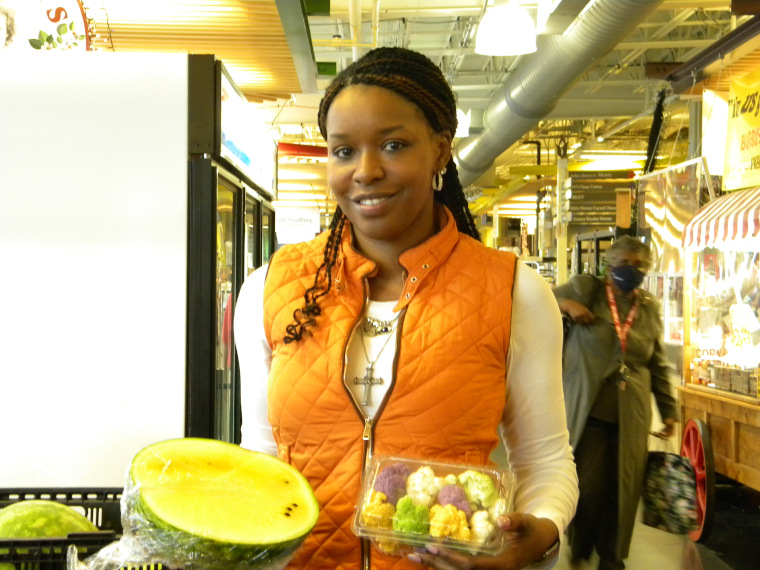 Featured photo: Shane Jackson, community nutrition instructor for Michigan State University, holds up yellow watermelon and rainbow cauliflower at the Flint Farmer’s Market. In her nutrition class being held currently at the Genesee County Jail, she teaches that each color of the “rainbow” in fruits and vegetables has a different benefit.

The inmates were “blown away” and said for the first time they felt like they are still human despite where they are because they are currently having the opportunity to take part in “Eat Healthy, Be Active” with Shane Jackson. Jackson is a community nutrition instructor for Michigan State University.

They are getting the opportunity to learn to make lifestyle changes from the moment they hit the pavement outside Genesee County Jail-and possibly even before.

Jackson had the idea to hold the class at the county jail.

In a meeting with the governor, Jackson brought up the conversation about being “hangry.” According to Jackson, this means being other hungry and angry.

She said Flint residents are limited in where they can get fresh produce, but there is an abundance of liquor stores throughout the city.

Jackson started running “Eat Healthy, Be Active” at New Paths. New Paths was established in 1979 to serve as a cost effective alternative for jail or prison bound adults with non-violent offenses and offers addiction treatment. Jackson was pleased to see the way the men’s self esteem started to improve as a result of the class and her mentoring there.

Currently, Jackson is working with close to 120 inmates at Genesee County Jail. The majority of the students are parents, which Jackson describes as “heartbreaking.”

For the first class, participants made a romaine turkey taco with 97/3 turkey (97% protein, 3% fat). According to Jackson, the water in the romaine lettuce helps keep the body lubricated-from the bones to the joints. Green vegetables can also help the digestive system. Red tomatoes were added, which are good for the heart. In addition, she used low-fat cheese. Jackson gave the tacos a twist by adding black beans and sweet potatoes, which many of the inmates had never had before.

The class made turkey sliders for the second class with sweet red peppers, low fat cheese, romaine lettuce, tomatoes and no salt. Jackson teaches the students to use more herbs so less salt is needed. She also added kettle chips made in Traverse City, Michigan with the skins on them to the meal.

The third class’s meal consists of a spinach chicken salad with kale.

“Kale is something that gives kind of this super boost of energy.”

Strawberries will also be used in the salad, along with walnuts-“a healthy fat that is good for the brain,” according to Jackson.

Jackson, who has many years under her belt as a nutrition instructor, was inspired to talk to the local sheriff after learning of a study done in the United Kingdom. There, Omega 3 fish oil was implemented inside the jai and behavior started to change. Another researcher was doing a similar study with juveniles in Cook County,  in Illinois.

Locally, inmates will be able to purchase some of the meals they are making.

“You can see the boost of energy, and you can see their spirits and demeanors have changed from the first day I was in the class.”

Jackson was also recently reached out to by a representative from the American Probation and Parole Association who wanted more information about her class.

Flint Community Schools closed Jan. 3-4 due to rise in COVID-19 numbers through county