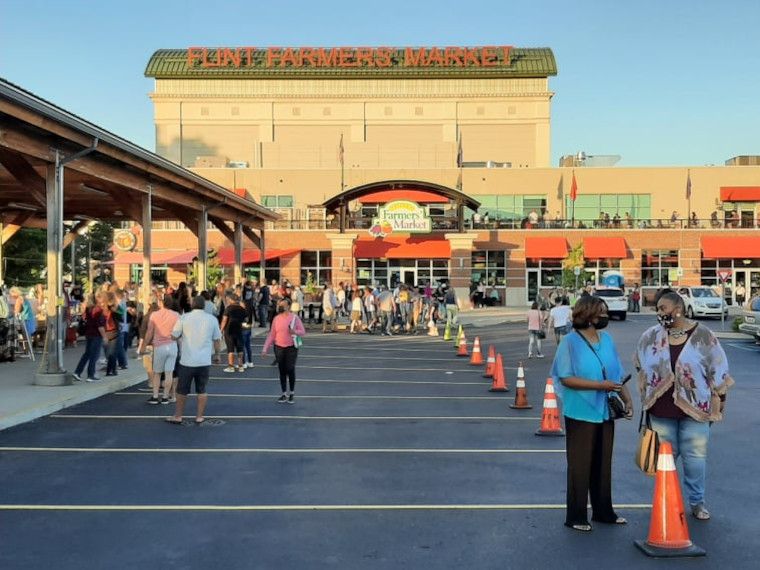 The Night Market started in July as an extension of Flint Social Club, a mentoring a capacity-building program for up and coming chefs or people who want to get into the food business.

“It’s always such a really awesome vibe,” Tony Vu, chef and owner of MaMang in Flint Farmer’s Market and executive director and founder of Flint Social Club, referring to the many night markets he has seen.

“Streets will start to fill up,” Vu added. “It’s always a lot of fun. It’s always a lot of youth, and young people end up coming out as well…With how strong the community in Flint is, I just thought it was a great way to kind of showcase all the creative talent that’s here in the city.”

At the September Night Market there were about 20 vendors-selling everything from foods and drinks to arts and crafts to skin care products.

Vu saw Deonta busking on Saginaw Street the night before and asked him to participate because of his enormous talent.

According to Vu, the club has been putting on these types of social gatherings for about five years in different places and in different forms.

Vu said the Night Market has been growing continuously because of investments made, such as the investment in a food trailer, as well as a partnership with the What’s Up Downtown Project with Kady Yellow.

Kady Yellow, director of placemaking for the What’s Up Downtown (WUD) Project, is known for being a “creative placemaker.” She strongly believes community development, economic development, city and urban planning can happen through art, culture and music. Her role in the Night Market is to make sure the art, music and culture in Flint are authentically represented. For the last gathering, Flint Social Club and What’s Up Downtown paired together to trust the Detroit representatives to also pick some cultural icons, influencers and creatives of Detroit to come and experience Flint, Michigan. In doing so, the two organizations also worked with We Are Culture Creators, a music management and promotion company in Detroit, Michigan.

Vu traveled around the world prior to COVID and has had an opportunity to see night markets that exists throughout the world. He was particularly inspired by the night markets in East Asia and Latin American countries.

Although individual vendors charge for their products, it has always been free to attend the Night at Farmer’s Market in Flint.

Because Vu realizes the obstacles entrepreneurs face, his organization is able to guide them through even the process of even being able to fill out the proper paperwork so they can concentrate on what they do best-create and serve.

“We don’t charge for vendor fees,” Vu said. “We do the exact opposite, and we provide food scholarship to some of our food vendors to help them lower the barriers.”

The final Night at the Market at Flint Farmer’s Market will be held October 7. To register, reach out to Flint Social Club’s Facebook page.

Impact of Unity March expected to be lasting