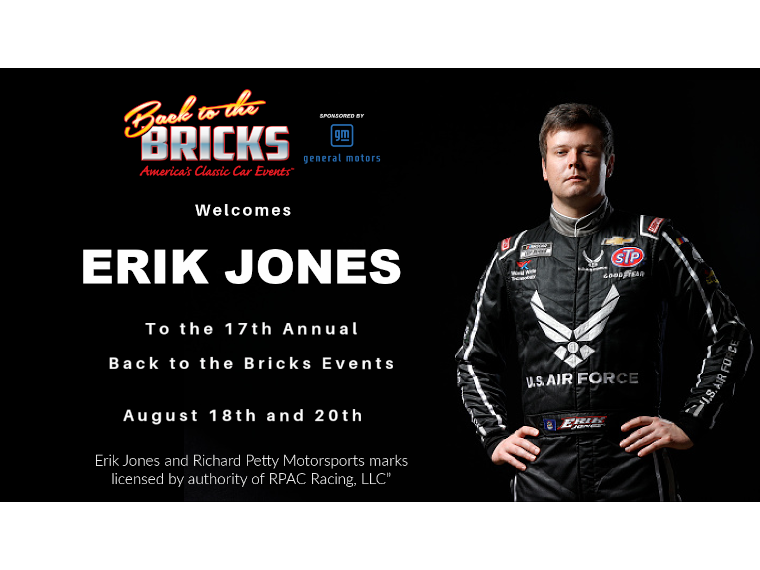 August 30, 2021: Back to the Bricks® is excited to announce Michigan Native and NASCAR driver Erik Jones is joining this year’s 17th Annual festivities. Jones will join Official Grand Marshal Dr. Bobby Mukkamala for the 2021 Back to the Bricks Ribbon Cutting events. The ribbon cutting and presentation will begin at 4 p.m. on Wednesday, August 18th at Factory One, in Flint.

After the ribbon is cut, Dr. Bobby and Erik Jones will drive their own cars and lead the way for the Rolling Cruise along with our local police municipalities. Their first stop will be the Grand Blanc High School, where they will visit the “Roll on In” event, compliments of the Grand Blanc Chamber. They will then lead the way to the Official Mega Site IINN (Corner of Hemphill and Saginaw) to visit with sponsors, vendors and all the automotive displays.

Jones will also join Back to the Bricks® on Friday on the Flat Lot, on the corner of Kearsley and Saginaw Street from 5 – 6:30 p.m. to sign autographs. Wrist band line up begins at 2 p.m. Then Jones will take the stage before the Cruise N Concert for a special announcement.

A Byron, Michigan native, Erik Jones started racing at the age of ten running quarter midget races, traveling
around Michigan with his family. He earned his first CRA/All Star JEGS Championship in 2011 and then a NASCAR Camping World Truck Series Championship in 2015. With that accomplishment, Jones became the youngest NASCAR champion in that series, at the age of 19 years old, and collected Rookie of the Year Honors which he went on to achieve in consecutive years in all three of NASCAR’s top racing series. Jones’ first-career NASCAR Cup Series victory came in 2018 at the famous Daytona (Fla.) International Speedway and he followed that victory up with another special achievement, capturing the checkered flag one year later at Darlington (S.C.) Raceway, the track appropriately named “Too Tough to Tame.”

More recently Jones kicked-off the 2020 NASCAR Cup Series season with a win in the Busch Clash, an annual invitation only 75-lap exhibition race at the Daytona International Speedway. In 2021, Jones was invited to partner with NASCAR legend the “King,” Richard Petty, and together they began a quest to bring the famous No. 43 Chevrolet back to victory lane. Jones will compete with Richard Petty Motorsports (RPM) at Michigan International Speedway in Brooklyn on Sunday, August 22, 2021.

Back to the Bricks® is honored to have him take part in our festivities and welcome him on stage for his special announcement.