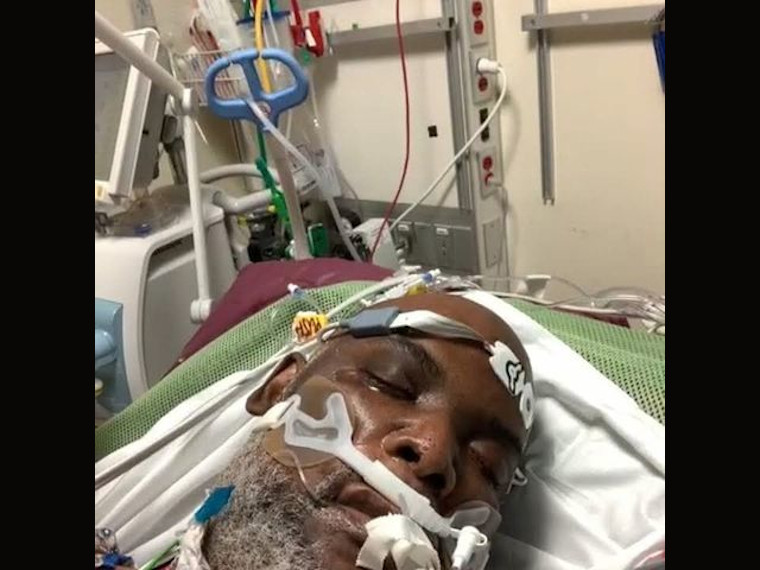 Bobby Jackson, age 49, of Saginaw Township, survived COVID-19, a terrifying coma and over 50 days hospitalized on a ventilator and is now grateful he is able consider the various available vaccines.

Jackson was diagnosed with sarcoidosis in 2007; a chronic disease of unknown cause that is characterized by the formation of nodules, especially in the lymph nodes, lungs, bones and skin. According to henryford.com, sarcoidosis is 10 times more common in African Americans compared to white Americans. The disease made it hard for Jackson; an African American male.

“I had experienced a lot of tiredness, but I had push through most work days,” he said. “Then I went into remission around 2010. But in 2018, sarcoidosis came back full force and attacked my vocal cord. So, I have a very large vocal cord, which has prevented me from doing my job effectively as I am a certified nurse assistant here in Michigan.”

On most days, Jackson’s voice is raspy, but some days he can’t talk at all, which is a very frustrating situation for Jackson.

Jackson has an idea of where he may have also contracted COVID-19. He said he had taken his son to a local gym in Saginaw to help him get conditioned for the start of football season.

“I noticed nobody was wearing masks,” he said. “I was wearing my mask, but maybe pulled it down off my face a couple times to get a breath of fresh air. So I later found out twenty three people at that gym were diagnosed with COVID-19.”

Jackson’s initial symptoms included coughing uncontrollably and the loss in the ability to taste food. He also said he could barely stand up straight. Jackson thought at that time he was going to die.

“My wife rushed me to the local hospital, and I was tested for COVID-19. The results came back positive in a hour.”

Jackson and his wife were devastated.

“Me and my wife immediately started crying and gave each other a hug as I immediately was rushed off and isolated.”

Jackson said he developed congestive heart failure at the local hospital, which is why he had to be transferred to the University of Michigan hospital immediately.

Dr. Robert Morrison of the University of Michigan hospital told Jackson he had to sedate Jackson at once because if he didn’t he would die.

Jackson had to stay in the hospital on a ventilator for 52 days and he had a blood transfusion while sedated. But after rehabilitation, he was finally able to return home.

Although he still has to use oxygen and a walker because of his battle with COVID, he is thankful he is alive.

“I’m grateful for my entire family and extended family and sarcoidosis support groups who prayed for me when I couldn’t pray for myself, when I was in that coma for all them days not knowing where I was.”

Jackson’s doctor has told him everything is fairly new in regards to the vaccine.

“The local health department stated I need to get it after ten days if having a negative diagnosis. I’m personally trying to educate myself on the different vaccines before I make a decision.”