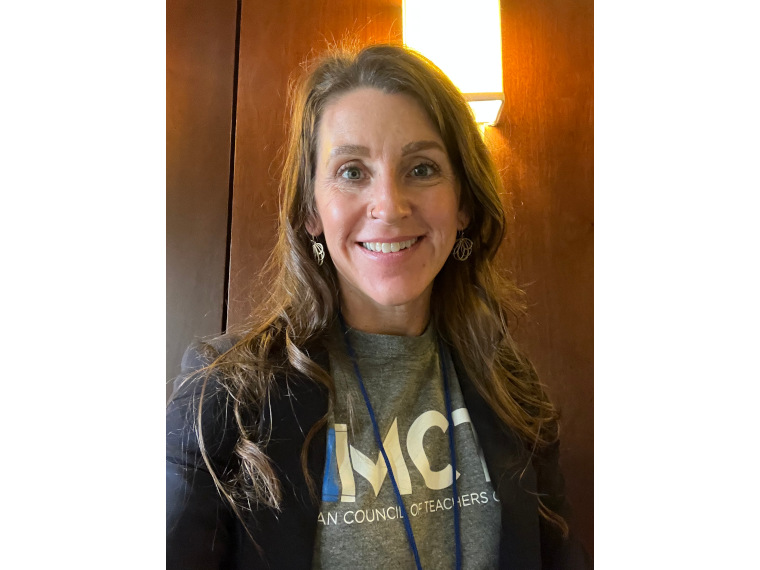 The Courier recently had a chance to speak with Michigan Council of Teachers of English (MCTE) President Elect Carrie Mattern, who grew up in Flint and teaches at Carman-Ainsworth High School, about how she and others are forwarding diversity, equity and inclusion both inside and outside of the classroom.

Forwarding diversity, equity and inclusion both inside and outside of the classroom

“Students leave my class in June saying things like: ‘I have learned more history in this class than four years combined;‘ ‘Are you sure you didn’t major in history, Mattern?;’ and ‘I feel like this was a life class, not an English class,’” Mattern explained.

Mattern said she uses her privilege as a white woman educator of predominantly Black and Brown teens to teach them the truth so they become more aware, less shrouded in stories that are inaccurate and use critical thinking skills that asks questions of all texts, authors and educators.

“Students leave my classroom better communicators by understanding that their language is valid and that Black Language is important to recognize and honor as a language which I learned through Black scholar, author and MSU PH, April Baker-Bell,” Mattern said.

Mattern stated she would be remiss if she didn’t mention that her students also teach her every single day.

Learning from many great Flint educators, as well as so many people across the country doing the work like Priya Vulcha and Winona Guo has helped Mattern to continue to integrate her curriculum choices, language and methodologies.. “

Vulchi and Guo are the founders of the racial literacy non-profit CHOOSE and authors of “Tell Me Who You Are.” The two college juniors wrote “Tell Me Who You Are” after traveling to all 50 states to interview people about race and intersectionality.

According to Mattern, being born in Flint bestows everyone a sense of being as tough as Flint, as well as taking pride in the place of your birth.

“It also is my duty to stay connected to the area I was born in and continue to work towards a more equitable education system as well as help support students who may not be familiar with the Native roots of Flint.”

Mattern is working toward a system that educates young people about Indigenous culture rather than contribute to its erasure.

The DEI (Diversity, Equity and Inclusion) work Mattern is involved in at Carman-Ainsworth High School is composed of fifteen volunteer educators who, after the murder of George Floyd and the compassionate call-in from Carman-Ainsworth students, decided they would create a community that educates the C-AHS staff and students on racial literacy. They also educate on the difference between equity and equality, as well as the power of daily language choices we make in and out of the classroom.

“Since forming the summer of 2020, we have sponsored a student-led club called JEDI.”

The students lead the JEDI meetings and decide what their tasks each week will be, while the DEI volunteers are there to help stay on task and support students by listening to their concerns.

Since its inception in 1922, MCTE has been a guide for K-college educators in Michigan. Currently, the organization offers membership to any interested Michigan educator, as well as a few in Ontario.

This past fall at the MCTE annual conference, there were four Flint presenters out of 27 total accepted throughout the state.  Flint educators were awarded the DIJE scholarship in years past (as well as this year too), which honors them with conference registration and membership fees waived.

“This year’s fall conference brought Flint to Lansing with keynote Semaj Brown, Flint’s very own poet laureate, as well as guest speaker, Christopher Paul Curtis who was awarded a lifetime achievement award for his authorship and continued work with children’s literacy. Their work is powerful and necessary for youth today.”

According to Mattern, Brown’s keynote address was a vision. It was one of what education could be-and should be-in a just world that is equitable, diverse, and inclusive.

“She fused science, art, storytelling and language into a tapestry for everyone in that room to discover. I think this is what led to her standing ovation: the perfectly articulated, intentional way that Semaj connected with every educator in the space in such a small timeframe.”

Brown was also asked to publish her poem in the award-winning, peer-edited journal that MCTE publishes each year, the Language Arts Journal of Michigan.

Brown stated she didn’t realize the keynote address was a poem.

“But yes, I love thinking of it that way, and I would be so pleased to have it published!” Brown said.

The vision and the future

Mattern explained the vision for this conference was inspired by a few key factors: MLKS Jr.’s work specifically the essays in “Where Do We Go From Here,” enrolled tribal member of the Sault St. Marie Chippewa Indian Tribe, Angeline Boulley’s work on indigenizing the hero cycle when writing “FireKeeper’s Daughter” and the MCTE’s antiracist statement from 2020. The statement reads in its entirety here: https://mymcte.org/2020/06/04/mctes-commitments-and-action-steps-to-move-toward-antiracism/

“In addition to our statement, I knew that the work of Michigan author Angeline Boulley and Dr. King’s could help inspire educators who are exhausted, overextended and fairly downtrodden the past three years. I like that Dr. King centers the actions that must occur post-Civil Rights movement in his book, ‘Where Do We Go From Here?’ because we cannot grow complacent if we want to reimagine and create the world as just, equitable, diverse and inclusive for all.”

Boulley worked in Washington, DC for years as the director of the Office of Indian Education for the Department of Education. Mattern pointed out Boulley continues to stand up for educators who continue being scapegoated in society, as well as students who need support in places where decisions about them that affect them aren’t even made by them.

Mattern looks forward to the progress MCTE continues to make as an organization.

“This year’s conference put our antiracist statement from 2020 into complete action and I am proud of the work we will continue to do for our state’s educators, stakeholders, and most importantly, students,” she said.