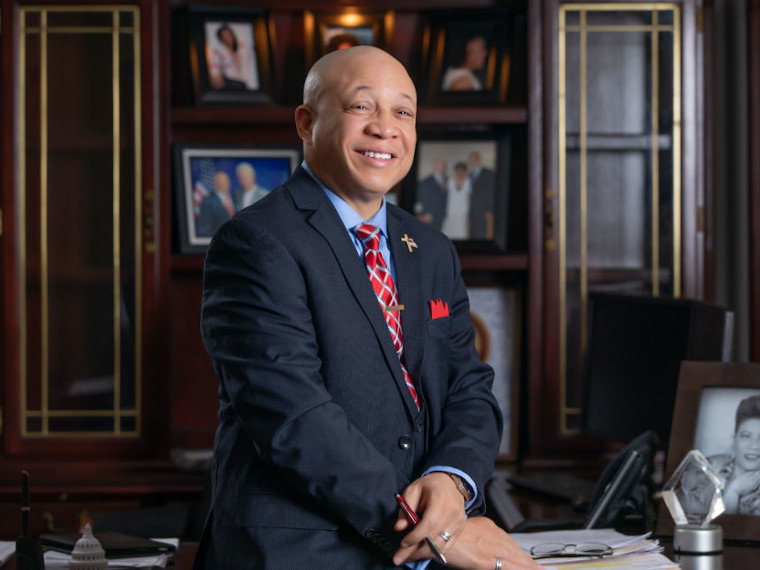 According to unofficial results from the Genesee County Clerk’s Office, 52.90% of Flint voters have “spoken out” saying they want Mayor Sheldon Neeley to remain mayor. The results show 30.88% of registered voters participated in the mayoral election on or before November 8. Of those voters, 47.10% indicated through their votes Former Mayor Dr. Karen Weaver was their preferred mayoral candidate. 10,411 casts votes for Weaver, while 11,692 voted for Neeley, the results show.

According to campaign finance reports filed by the end close of October, Weaver spent over $72,000. Neeley spent $166,000 on his re-election campaign. Neeley pointed out his track record consistently while campaigning.

Neeley thanked those who voted and those who “have not participated in one of the greatest American rights that we have.”

Neeley stated when he and others looked at a level of discourse in community or electoral activity, there was “a bridge and a divide that is crossed as a byproduct of that.”

A message to the resident of Flint from Mayor Sheldon Neeley was posted on the City of Flint’s official Facebook page November 9. In his message, Neeley said:

“I want to thank the entire Flint community for coming together to participate in the democratic process. The Neeley administration is back to working for the benefit of one city, One Flint.

In an effort to unite our community after a long election cycle, I am extending the olive branch to anyone who wants to work to improve the lives of residents in this great city. Together, let’s move the people’s agenda forward. We cannot afford to be divided. We must come together for the common good of residents of this great city.

My goal is to speak to people’s hopes and aspirations, and to work through partnerships. Moving forward, we’ll bring this community together in a positive way. We are one community, One Flint.

My open-door hours will resume December 8. Beginning December 8, residents can drop by Flint City Hall Thursdays from 1-3 p.m. to meet with me in person. I look forward to hearing from and supporting you, the residents of the City of Flint.”

Neeley will serve another four-year term starting at noon on the first Monday following certification of the results of the governor’s race by the Board of State Canvassers.

49TH NAACP IMAGE AWARDS TO AIR LIVE ON TV ONE