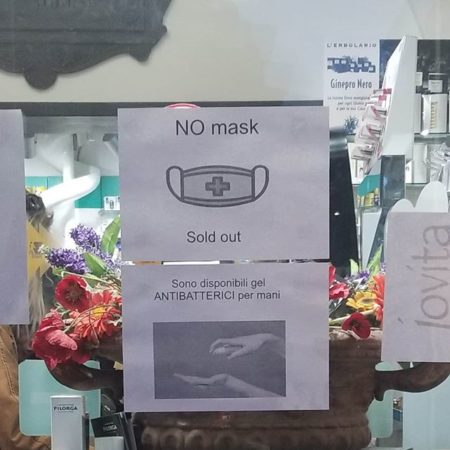 One Flint resident feared her dream come true had become a nightmare when she returned from the trip of a lifetime overseas, got sick shortly afterwards and had to be tested for the coronavirus.

Lisa Land, a photographer, layout coordinator and graphic artist for the Flint Courier News, had wanted to go to Italy for 40 years or more. She was attracted to the art and the beauty of the landscapes. She knew she was going to finally go with her niece. They had traveled to Italy before as her niece’s husband’s family was there, and Land was waiting excitedly for them to go back. Land did not know anything about the coronavirus when she bought tickets for her trips five months ahead of time.

“I did not start hearing about it much until after I was in Italy. I wasn’t scared of getting the virus when I started hearing about it. The virus was spreading in a region about two hours north of where we were,” Land said.

Land arrived in Italy February 15 and left on February 29.

“It was amazing. I stayed with my nephew’s family. My nephew has a house there that was his father’s. It’s in a farming village in the city of Pastena, in the region of Lazio. The mountains and the beautiful architecture of the little village with the houses climbing up the hills was breathtaking and beautiful,” Land said.

Talk of the rapid spread of the coronavirus throughout Italy did not affect Land’s trip or those she traveled with initially.

“When I got there, we knew it was in China. But, it seemed to be mostly isolated in China at that time. We were in the village. We weren’t really watching television. We were kind of disconnected from that for about five days.”

By the time Land left Italy, people had started wearing face masks there, and pharmacies were out of them.

“When I was in Rome, they would have signs on the doors of pharmacies that said ‘no face masks.’ I took a photo of that. There really wasn’t an outbreak in Rome. People were just starting to be really careful. A lot of people were wearing scarves over their faces and masks. I would say about a full quarter of the population seemed to be wearing them on the last day I left.”

When Land’s airplane arrived in Detroit, she and the other passengers were told to stay in their seats. A family was called and escorted from the airplane by workers wearing protective suits. Land said the family had likely been exposed to the coronavirus, and this incident caught Land’s attention.

“They may have even been in China,” she said.

Land felt fine when she returned from her trip-besides a little jet lag. She started feeling sick about six days later. She had a mild fever, difficulty breathing, lethargy and all the other symptoms commonly associated with the coronavirus.

“It was kind of terrifying because it had spread through Italy literally during the time I was there. So, I had a sense of how fast it could spread. If I had it, I felt a responsibility to know that so that I could let anybody I had been in contact with since I’d been home know and hopefully not spread it.”

Land’s 89-year-old mother decided not to see Land until two weeks had passed of her not being sick.

“A lot of people did that.”

Land said she was one of her doctor’s office’s first calls requesting to be tested for the coronavirus. According to Land, they didn’t know what to do at the time because nobody had organized anything in Michigan. They suggested Land go to the emergency rom. She was eventually tested at McLaren Flint hospital.

“It was bizarre, honestly. McLaren has this thing where you can schedule your ER visit. So, I went online and told them: ‘I just got back from Rome. I’m having the symptoms. It could be a normal virus; a regular virus…or it could be corona.’”

Land had looked for a coronavirus hotline for Michigan, but at the time there was not one in existence yet. When she arrived to the emergency room, she again stated why she was there. She was told to go to the waiting room. She was called to the desk and her vitals were taken. She had been expecting everyone to be wearing protective suits by the time she arrived, but nobody was even wearing masks at first.

“I told him the whole story. He was typing it all. Then, he looked at me and said ‘wait, when did you come back from Rome?’ I said I was home late afternoon February 29. Then, he said ‘oh my gosh!’ Get everybody in line! Tell them go to the waiting room! They asked people to put on their masks. Then, they took me outside to the front door and took me back through the ambulance entrance and put me in an isolation room.”

Land remembers doctors looking at her through a window and said that added to the weirdness of her experience. She said McLaren did not have the testing kit at the time. The hospital called the state of Michigan, which did not have the kits either. Then, it was discovered there the test could be performed without the kit. Land remembers swabs being stuck deeply into her nose and throat in order to get tissue samples to send to the health department.

“It’s uncomfortable for a couple seconds.”

Land was told she would hear back about the results of her tests very soon-maybe even that night.

“It was four days before I heard anything. It was very hard. You’re like ‘am I contagious? Am I going to be OK? Is this going to get worse?’ I was worried anyone I encountered at a grocery store could have gotten it. So, the wait was very hard.”

Family and friends continued to call Land to see how she was doing on a daily basis. Land decided to call to look into the matter and see what was going on.

“It took me three hours to find a human being to talk to. I researched online and found phone numbers. I finally got in contact with the local Michigan health department and I found the woman who was following my case. She told me she knew about it and I should hear back some time soon.”

The pathologist called Land the night before the first two cases in Michigan were reported and told her she had a different virus, not coronavirus. This was an enormous relief to her. When she got the news, she was able to relax.

“There is a lot of tension you carry in your body wondering about things like that.”

Land said almost immediately after her trip she would like to return to Italy one day. She said she still feels that way, but partially due to the spread of the coronavirus, she believes it will be at least a year and a half before she does.

Besides the fact that having the testing done eased Land’s mind, Land said because she was one of the first cases.

“I guess it helped the awareness in this area and let people know it was coming.”

Latest information on the November 22, 2021 explosion provided by mayor