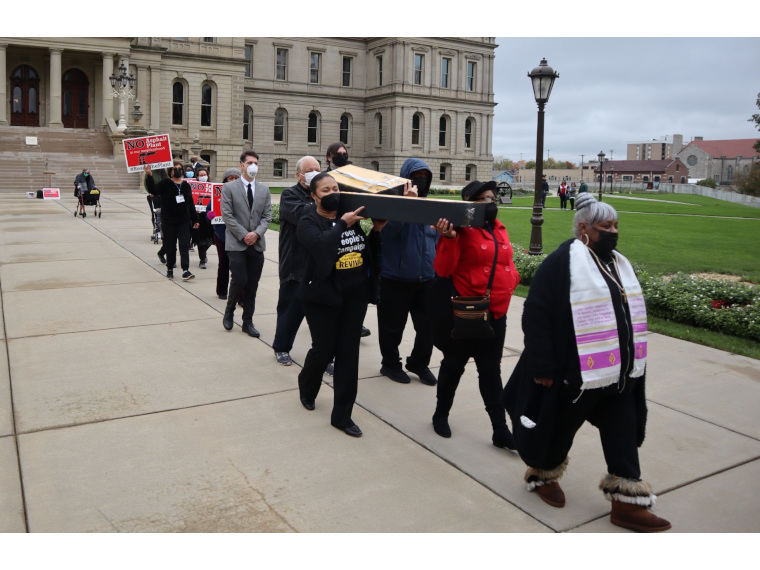 By holding a mock funeral in Lansing, Flint residents recently delivered petitions demanding that the state of Michigan deny the Ajax Materials Corporation’s request for an air quality permit that would allow the company to build a new asphalt plant across the street from the largest low-income public housing complex in Flint.

State regulators have asked Ajax to consider other potential sites. The Environmental Protection Agency has said the Ajax plant proposed to be near the Flint city limit would go into an area already facing air quality issues.

Coalition members went to Lansing in funeral apparel and delivered coffins decorated in Ajax company colors, with petitions signed by nearly 4,000 Flint residents demanding that the permit be denied on November 15, the new date EGLE is expected to make its decision regarding the permit.

Bishop Bernadel Jefferson, who will be 70 in November, lives in Mt. Morris, a block and a half away from the proposed site. She said she “already has problems because of the wood burning plant” nearby.

“I have a grandbaby that is 1,500 feet away (from the proposed Ajax site) that lives in the housing complex that’s not a year old that has already been in the hospital for breathing problems,” Jefferson said. “The young man who worked at Golden Corral and lived in the same housing complex died from an asthma attack on the way home from work. I’m very concerned.”

Jefferson has helped to get petition signatures regarding the matter, has participated in public comment, has went door to door and has informed the housing complex of what was going on. She was the eulogist in the mock funeral for the perceived death of the neighborhood, in north Flint, if the plant is granted the permit.

“I have a bad back,” she said. “I’ve got bad knees, but I stood there because it was that important to let our voice be heard.”

There were two sets of petitions and comments delivered to the governor and attorney general at the mock funeral. ETM Flint created the first one and the Womack family, who also live in Flint, created another one to lend their support.

Munroe-Younis said the governor made a promise that she would stand for environmental justice for all of Michigan, and especially for Flint.

“She ran on that promise, and she also ran on the promise of fixing the roads,” Munroe-Younis said. “If you’re going to do any large infrastructure project like that and you care about environmental justice, you should be able to anticipate there will be environmental justice considerations. So, an unintended consequence of her policy to fix the roads is that this plant is being built in order to ramp up the production of asphalt. But, it doesn’t have to be at this location.”

The neighborhood near the proposed plant has been fighting environmental justice fights for decades. In the 1990s, there was a push to stop the building of the Genesee Power Station, a biomass incinerator which is in the same industrial complex as Ajax’s land. This facility incinerates wood waste to generate electricity.

According to an environmental case study found at  http://websites.umich.edu/, some of the wood waste fuel from the incinerator comes from the demolition of buildings and other structures. This demolition wood is sometimes coated with lead-based paint, and other lead-based substances that were used in the construction of the demolished buildings, the site says. Lead is not the only substance the incinerator releases, but is the most harmful to the surrounding community. The website also says pollution in the community dates back to before this facility was even constructed.

Ambrosia Brown, P.E., said it takes time, even if there are a minimal number of comments received just to write a response to comments and have it internally reviewed, as well as looked at by the decision maker. Brown said hundreds of comments, in this case, were received.

“We review Permit to Install (PTI)  applications to make sure that proposed projects meet all the rules and regulations in the law that’s in place to protect public health, and that has to be the basis of our decision,” Brown said.