After a holiday called “inexcusable” and “horrendous” after four lives were lost to gun violence, pastors, community leaders and activists met at Cathedral of Faith Church on DuPont St. Dec. 29 to march and pray.

“The Lord says in His Word where two of three are gathered together there He will be in the midst,” said Pastor Christopher Martin; pastor of Cathedral of Faith church.

Martin said he grew up in Flint and when Cathedral of Faith was a school, he attended it. Now that he and others were blessed to have it as a church, he said violence like what recently occurred in the area would not be tolerated so near to a church. He said since more than three were gathered at the church, the Lord was present for the event.
Martin said he and the others present were going to believe God that when they get through, God was going to bless the city.

“Our police officers put their life in jeopardy every day and every night to protect the city that was going through an epidemic before we went through a pandemic,” Martin added. “Our water has been poisoned for the last six years. We’ve had problems. We’ve had issues, and now we’re in a pandemic. But it doesn’t matter whether we’re in an epidemic or a pandemic because God is the deliverer of us all.”

“He will forgive sin, and He will heal the land,” Martin said. “I don’t know about you but I feel like getting the land healed…When we pray, and when we come together our land will be healed.”

The “prayer warriors” went down DuPont Street, up Home Street, to Sally Street and back around the church. Martin requested they be cautious in everything they do because of the pandemic and remain socially distance. He said some had asked if they could remain in their cars and drive with the group, which Martin said was acceptable.

“The goal here today is unity.”

The prayer warriors prayed for the Lord to “cover their streets.” Martin prayed God would “turn it around” for the residents of Flint. Lisia Williams, Cheryl Schufford
and Pastor LeQuin Williams also prayed out loud as the crowd marched.

Sharon Williams made a point to attend the walk after her grandson; 23-year-old Curdetrius Keaton-Williams, was shot and killed by a homeowner in the 600 block West Pulaski Avenue.

Jackson is hoping for a change of heart for the murderers and that they come to know the Lord and turn their lives around.

25-year-old Naomi Anthony was found shot and dead in Hasselbring Park on the morning after Christmas.

Anthony’s godsister cried out on the ground surrounded by candles right by where Anthony was shot. She had traveled from North Carolina but still considers herself a “Flintstone.”

“They left you right here!” she screamed out in agony.

White said it was a very emotional time because she had been close to her sister for so many years. She last talked to Anthony on Christmas Day.

“You wake up to this person; you talk to them all day long; then all of a sudden, they’re gone,” White said. “I can’t call you. I can’t hear your voice, and I was the last person to my knowledge you talked to; I just talked to you right before your death-that does something to you.”

White said she loved her godsister out loud and said she was going to help take care of the kids.

“They didn’t have to leave you like that. We goin’ fight this baby.”

White said the gun violence had to stop and at the end of the day God is the one who moves everything; who has the ultimate power through all that’s going on.

The last thing her godsister said to her was that she loved her and White continues to replay this in her mind.

“That’s all that matters.”

In another incident that occurred Dec. 26 on E. Pulaski Ave., a woman in her 40s was found dead at the scene and an infant, was transported to Hurley Medical Center in critical condition and taken into surgery but was later pronounced dead.

Valerie Toles said she was there supporting the church and supporting Families for Murdered Children.

“The little baby that got killed was my best friend’s great grandchild,” Toles said. “She lives in Arkansas. I was supporting her too.”

Lisia Williams is a lifelong resident of the city of Flint and a member of Cathedral of Faith. She said she felt the prayer was very effective and is hoping someone is birthed with an idea of how to combat the violence in the community.

“We’re talking healing,” she said. “…This is the first step of many steps.” 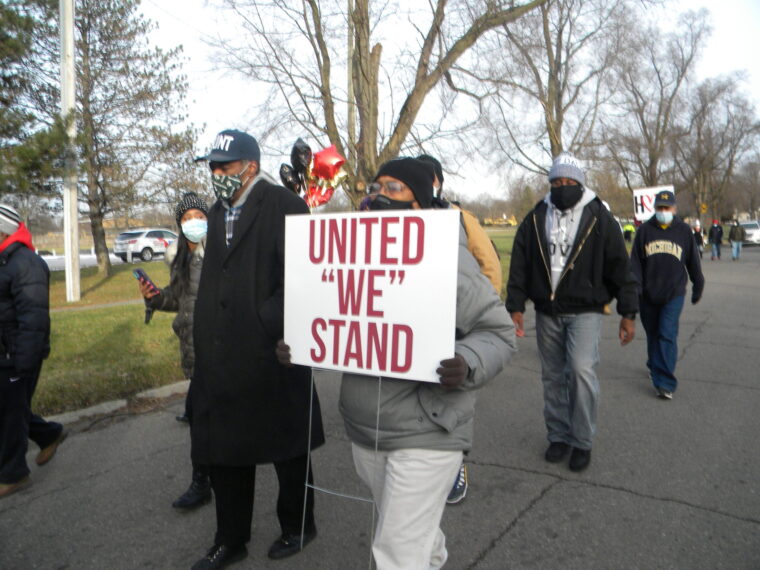 Pastor John P. Kee“Pass it On”