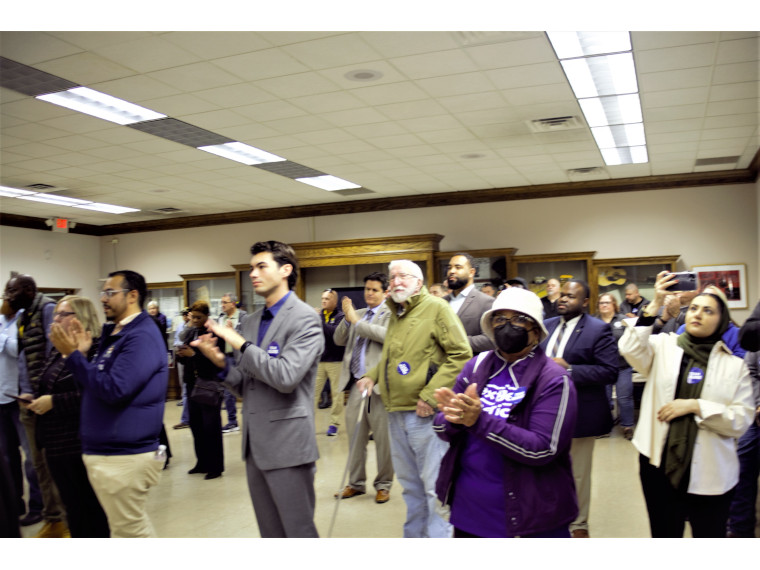 Flint and Genesse county area residents were encouraged to vote at a recent event hosted by Congressman Dan Kildee. As a longtime politician, Kildee and other local government officials spoke to a large crowd at the UAW Region 1-D hall about the importance of casting their ballots during the upcoming mid-term elections. Kildee and his supporters had visited other local spots to preach the same message earlier in the day.

The “Get Out the Vote” rally began with remarks from Secretary of Labor Marty Walsh. Walsh explained how voting is going to affect the progress of Flint and the state of Michigan as a whole.

“I ask you to generally go out and vote…get involved…understand and take a good look at who and what are on the ballot because it is important,” Walsh asked of the congregation.

“Elections do have consequences!” continued the secretary of labor.

During his speech, Kildee spoke passionately about the importance of voting, recalling his promise to cast a vote for an ailing former constituent, John Lewis. While suffering from COVID-19, the now-deceased Lewis requested that Kildee submit his ballot for him.

“Do you know how it must have felt…that I would go to the floor of the house…and announce to the speaker that I would now be casting a vote for Mr. Lewis from the 5th District of Georgia?” asked Kildee

“I made a promise to John Lewis for the last three months of his life. I spoke to him every single day that we voted to confirm his voting instructions” Kildee continued.

“I made a promise to him that I wouldn’t fail to deliver his vote. John is not with us anymore, but I want to keep delivering his vote. That vote is so precious.”

Kildee expounded on the importance of voting.

“There’s that one day a year when every one of us has exactly equal power,” Kildee told the assembly.

“But it’s only useful if we exercise that power.”

Neeley, who is running for re-election this term, stated that events like the rally encourage people to “go out and spread the word.”

“It’s equally important for people to participate in rallies to refresh their minds and hearts as it relates to voting,” he said.

The Courier asked if this mid-term election meant more to Flint residents than previous elections.

“Every election is significant,” Neeley responded. “It’s one of the greatest American rights we have as citizens of this country. We need to participate in our processes.”

“All issues are about quality of life; making money, engaging, surviving and living a quality of life…not Black or white, not Republican or Democrat,” Neeley explained.

Kildee and his campaign team plan to host similar “Get out the Vote” rallies before the election, which is now less than two weeks away. Yet, although he and his running mates plan to give many addresses in the coming days, the well-known congressman doesn’t expect voters to do the same.

“I’m not asking you to make speeches,” explained Kildee. “I’m asking you to have conversations, knocking on doors, getting on the phone.”

“It’s no pressure, folks. It’s up to us. Elections do have consequences!”

Governor Whitmer begins Post-State of the State Tour in Flint

Update regarding process to fill Flint Board of Education vacancy