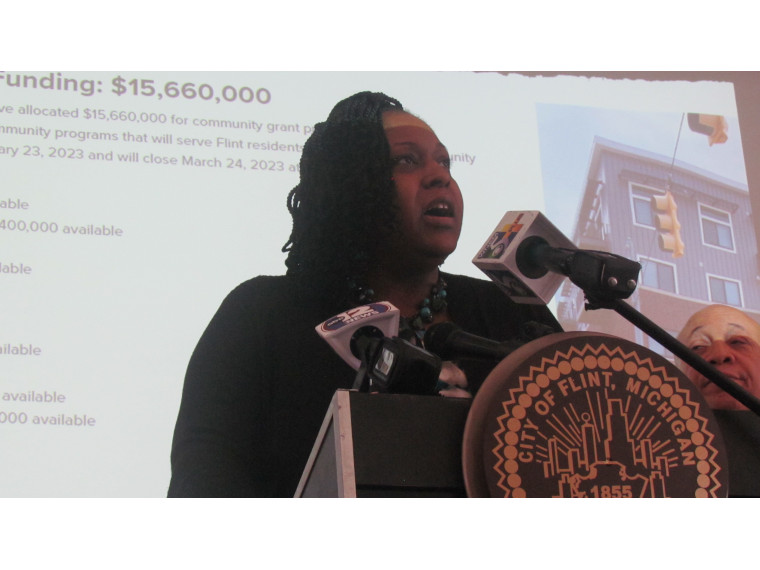 Mayor Sheldon Neeley expressed he felt the year 2023 is off to a great start.

At a press conference held on Jan. 23, Neeley discussed how $15,660,00, a portion of the $94.7 million in ARPA Flint was awarded, will be used. The ARPA funds were given to help communities from around the country recover from the pandemic.

Forty percent of the dollars have already been spent, according to Neeley. The money must be obligated by 2024 and spent by Dec. 31, 2026. He stated the City of Flint has been spending and allocating the federal funds very carefully.

Ernst & Young was hired to help with the process. Neeley said the compliance consultant is a top company throughout the country.

The City enlisted the help of the philanthropic community and partnered with Flint City Council members.

The City is also enlisting the help of residents in the community to help decide how to disperse the monies to the residents. Twelve Flint residents are also being selected out of 99 applications to help with the job.

According to Neeley, he found out from one of the U.S. mayors that Flint is “ahead of the curb” when it comes to dispersing the dollars.

The mayor recapped how some of the dollars have been being spent.

$8.9 million has been distributed to Flint residents for water bill relief.

He added $16 million in ARPA dollars also went towards a partnership with the county and philanthropic partners to make dollars turn into $39.5 million for the purpose of demolishing hazardous homes and blighted buildings by 2024.

Rob Widigan, chief financial officer for the City of Flint, stated approximately $37.9 million total has already been allocated of the city’s ARPA funds.

Ferguson said the City intends to remain compliant and does not intend to have to return any of the ARPA funds due to misjudgments in spending.

The deadline for the organizations will be 5 p.m. on March 27.

She said the ad hoc committee had been working with philanthropy and administration to make sure they all followed the best process possible.

“We’ve all been working together to put together something great,” Lewis said. “I’ll say the most objective way of receiving funds and allocating funds probably in the country.”

The application and program requirements for community grants are detailed in the Notice of Funding Opportunity, available at cityofflint.com/ARPA.

Caring for adult loved ones in 2023