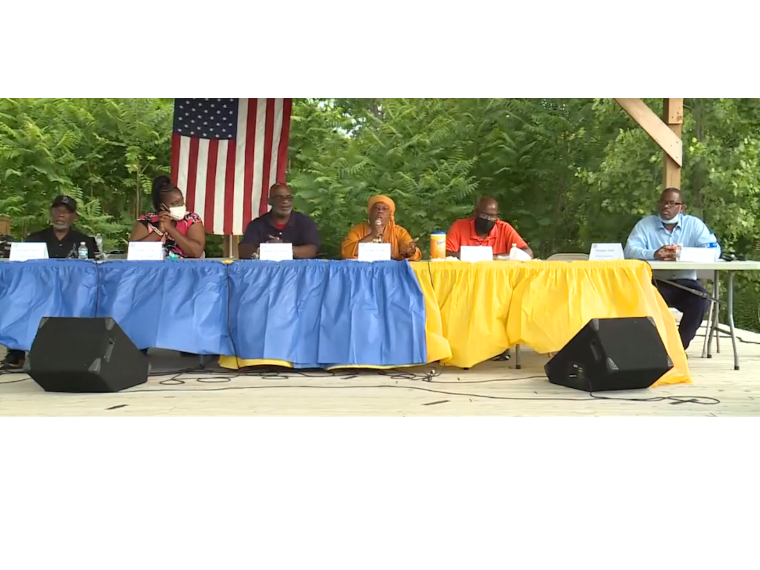 Now is the time residents can learn more about Flint City Council candidates in their wards before the election, including their plans for economic development in the city.

The City Council Primary election will be held Tuesday, August 3. The top two contenders from each ward will face each other in the general election, to be held November 2.

The Flint Branch NAACP, in collaboration with the Concerned Pastors for Social Action, the Genesee County Democratic Black Caucus and the Pan-Hellenic Council held a “Candidate Forum” for all Flint City Council primary candidates at the Heritage and Harmony Stage, on W. Dayton Street.  The moderators were Mike Woolfolk, anchor for Mid-Michigan NOW, and Dr. Karen Williams-Weaver, former mayor of Flint.

The first forum held was for candidates in the 2nd, 3rd and 4th Ward.

Among many other questions, each candidate was asked about their ideas concerning economic development.

(Sis) Audrey F. Young(-Muhammed), 2nd Ward-Flint City Council candidate, was asked to answer first, with each candidate having up to one minute to give their response.

Young said there were too many people who own property or own businesses in the city and don’t live in Flint.

“They come in and they raping us,” she continued. “They been raping us for years. We need to stop that. So, that will be one of the biggest areas that I would say with economic development. We need to help rehab some of these buildings around here that are in decent enough shape that can be rehabbed for small business owners. We got people that’s doing like the-like what we call Black Wall Street. But, they’re doing city Wall Street. You can come in and be a vendor. You can still sell. We got a lot of talent around here. Why we’re not putting it to use? We don’t have the doors of opportunity open for us. It don’t have to be that you make something. You could offer a service.”

3rd Ward City Councilman Candidate AC Dumas, said he wanted to talk about the 69% Blacks that live in the 3rd Ward.

“Only 25% are white, and 6% are Hispanic and other races,” Dumas said. “I’m speaking Black, Black, Black and more Black-opportunities for Blacks. If you all got a problem with that-so be it. All over this city, downtown-they want to put a ‘legal weed joint’ down there now. They have every opportunity to foster downtown and the other wards, but not the 1st, 2nd, 3rd and 5th Ward. We need to start focusing on Black entrepreneurship and Blacks getting money, money, money. If we don’t do that, we lost. Look at us! We out here talking out ‘what we goin’ do  with the (approximate) $45 million?’ Ain’t even got a plan yet! Five Black councilpersons! You give me five Black councilpersons with a ready mind. I guarantee you, we’ll have a plan!”

“First of all, quit giving them OPRAs downtown and give some OPRAS to these businesses over here on the North Side and over there on Clio Road-‘cause if you look at all the OPRAS that ya done gave, that’s why we’re in the predicament that we’re in now,” Murphy said.

“You got all them businesses downtown,” Murphy continued. “They’re barely paying taxes, and as a result we’re suffering the consequences, and we ain’t got no money. That’s where the problem’s at.”

2nd Ward Councilman and Council Vice President Maurice Davis answered next, explaining that economic development could be dangerous on the North End of Flint because if the North End is developed, it raises the taxation of the residents, possibly causing more hardship and foreclosure in an area where many residents are “struggling to survive.” Davis is the president of the Historic Civic Park Business District Association. According to Davis, Uptown Reinvestment offered to buy his property for a large sum of money in order to develop.

“But, if I did it-it’s gonna tax everybody out of here,” Davis said. “We gotta be careful. People over here gotta be grandfathered in. They’re retired on fixed incomes, and I can’t make it pretty, and I can’t do it in a minute. But, I’m telling you what God loves. This is Uptown (Re)investment. ‘Davis, what about all the Blacks? You gonna put all that money over here? H***, we’ll clean it in an hour. That’s what they told me. I’m not hypothetical. Nothing but the truth.”

Ladel Lewis, candidate for 2nd Ward Flint City Council, said she might be a little bias, but she definitely that that Clio Road corridor needs to be a big focus because it was a once vibrant business district.

“We had Baskin-Robbins, Pizza Hut, pretty much, A&W-you name it,” Lewis continued. “The restaurants were there, and the economy was boomin’ right there on Clio Road. But now it’s just a desolate place that turned into an afterhours ju’ joints on Friday and Saturday nights. So, we definitely should focus a lot of that money there. But not just that. We need to focus on empowering and also supporting local business owners so residents-they could own a portion of their community, not an outsider coming in owning the community. So, that Clio Road corridor, that is definitely a place where economic development should take place.”

2nd Ward Councilman Candidate Arthur Woodson said he had been saying what he said “since he’s been back in Flint.”

“Change Clio Road back to the way it used to be,” Woodson said. “I never had to leave Clio Road to go anywhere. If you wanna see downtown mad, let’s change Clio Road to a DDA or a BDA district because every millage that you have, money comes out to the BDA-Business District Authority. Then, when you change it to that, you can go to the state MEDC, Michigan Economic Development Corporation, and get money from them-and then, when you do that, you can get those same OPRAs, tax free OPRAs, they get downtown. See, we already have everything in place. It’s just people that needs to stand up and quit sitting back watching other people get money. (And) when you start standing up and start talking, let council start talking about that right now. Watch how those businesses downtown start trying to put businesses on the North Side, giving you crumbs so that you don’t take their millions. See, that’s what’s gotta happen around here. Now you put me on the Council, I guarantee you every day I will be saying something. Even (though) we work part time, I don’t care. I’ll still be downtown saying something.”

Michael Doan, 4th Ward Flint City Council candidate, could not make it to the forum due to a flight delay.