LOS ANGELES – The community celebrated the life of a true change agent. The life celebration of Ermias Joseph Asghedom, better known to the world as Nipsey Hussle, was held on Thursday, April 11 at the Staples Center in Los Angeles, California. The center holds 21,000 and it was packed out with every seat filled.

The three-hour long service was a pure reflection of all that Nipsey represented during his 33 years on Earth –from the unity and array of the floral arrangements, to the words that each family member and close friend spoke, to the performances. The service began with a prolific photo of Nipsey Hussle on display with his song, “Victory Lap” playing as family, friends, the Nation of Isalm and the community gathered in the stadium. “Victory Lap” was indeed the perfect song that defined Ermias’ life.

There were many prolific moments throughout the service, including Nipsey’s publicist and longtime friend, Karen Civil, who read a letter that former President Barack Obama wrote to the family.

In the letter President Obama stated that, “…[Nipsey] saw potential in the community despite its flaws. He motivated the community to keep going. He made the choice to invest in the community instead of ignoring it. He set an example for young people to follow.”

There were musical tributes that showcased the service and life that Nipsey lived. Performers included, Marsha Ambrosius, Anthony Hamilton, Jhene Aiko and Stevie Wonder who closed out the ceremony with one of Hussle’s favorite songs. 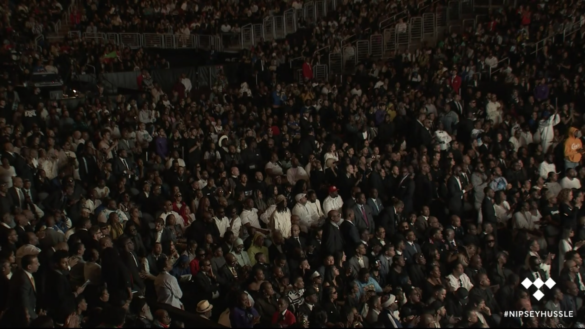 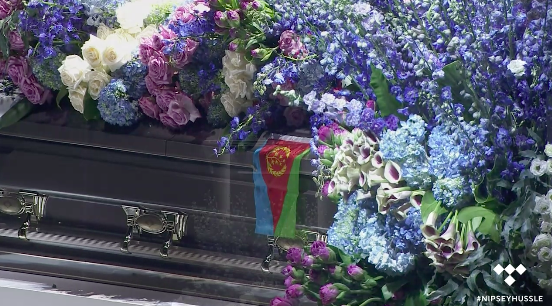 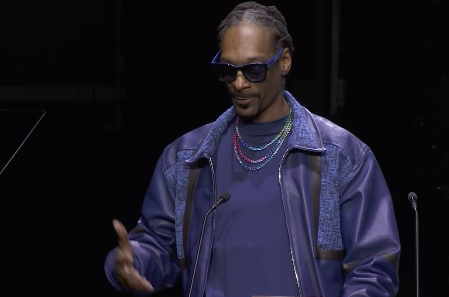 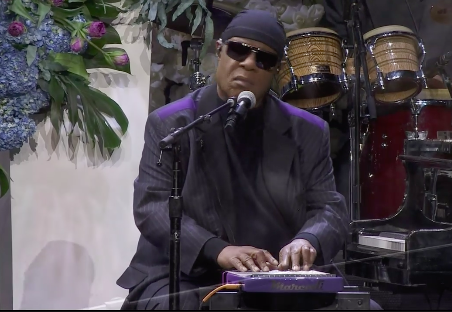 The service was truly a celebration of life and comfort. Family, friends and the community were comforted by words of encouragement from Hussle’s mother, Angelique Smith.

“I believe that we are all divine spirits,” Smith said. “We don’t have to call on God because He is within us. I have perfect peace. I am happy. I am strong. And if I can feel this way, so can you.”

Smith’s strength is unmeasurable. Rap mogul and friend Calvin “Snoop Dogg” Broadus acknowledged her strength. She was strong for everyone.

“He had vision for me that I didn’t even have for myself,” Snoop said when mentioning the type of impact that Nipsey had on his life.

The eulogy was read by Pastor Shep Crawford and the obituary was read by Adam Andebrhan. Immediately following the service, a 25-mile processional stretched throughout the city passing by popular landmarks, which included Nipsey Hussle’s, The Marathon Store, which is located at Slauson and Crenshaw. Nipsey and his brother own the lot that the store sits on.

It is without question that “The Marathon” will continue.

Naomi K. Bonman is the West Coast Correspondent for the Flint Courier.  She is a Journalist, Screenwriter, Producer, Radio/Podcast Host, and overall media professional. She has been covering a variety of beats for more than 11 years, including entertainment, fashion, social justice, community, sports, health and education.